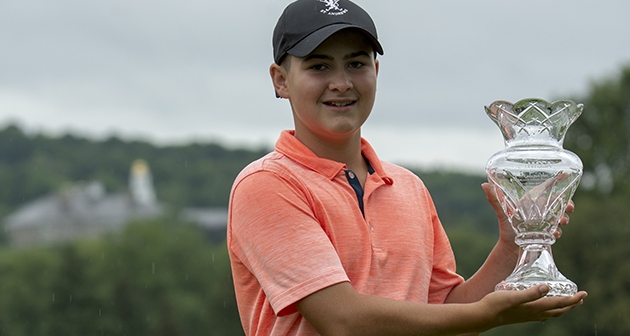 The 14-year-old from Bellevue Country Club, shot even-par during both rounds (72-36) at Seven Oaks during tough, wet conditions under rain that seemed to never to stop falling.

Tied for runner-up honors was Charlie Fischer of East Aurora Country Club and Zachary Locke of Corning Country Club, at 6-over 114.

At 115, was Velton Perry of Onondaga Golf & Country Club and Kevin Zhao of NYSGA eClub – WNY.

Joining Maglisco in the final pairing today, beginning on #1, was Locke and Perry.

Maglisco had a three-stroke cushion after the opener, and knew with only nine holes scheduled for the final round, someone would have to go low to catch up.

In his opening round, he began on #10 and began steadily with four pars and a bogey on the eleventh, a par 3. “He caught fire on Nos. 15 through 3 with five birdies in seven holes. He slipped at the very end with bogeys on his finishing holes, #8 and #9, but it wasn’t enough to evaporate his confidence.

“Got off to a decent start yesterday, made the turn at 1-under, got it back to 2-under with two to play, but bogeyed my last two. I knew I had a three-shot lead and one three-putt wasn’t going to kill me,” he said referring to his finish in the first round.

Although the forecast wasn’t looking great, and afternoon play for the Sub-Junior was delayed until after 2:00pm, Maglisco didn’t let what he couldn’t control get inside his head too much.

“I didn’t care what the weather was, just play through it. I knew someone would have to shoot a couple under to beat me. I was kind of tired, though. Bored of just sitting around,” he said referring to his Wednesday morning.

The 14-year-old won the Syracuse District Boys’ Sub-Junior Championship earlier this month and the young man took that confidence and funneled it into this week.

“I knew my irons and driver were on. It was just a matter of making putts. Coming in I really wanted to win, that was my goal.”

The two runner-ups, weren’t necessarily playing for second but knew they would have a hard time climbing back up to where Maglisco was on the leaderboard in only nine holes.

Locke, 15, was the closest to Maglisco after the first round, but started off with a double on the opening hole in the final, and couldn’t score to offset it. “Today I wanted to play aggressive, take dead aim at a lot of pins. I couldn’t get putts to fall, disappointed I couldn’t get a couple of birdies in there.”

“The tournament was fun. I took advantage of some good shots and let some others slide by.”

Fischer began the week bogey-double-par-bogey, but converted five birdies and only a few bogeys through the final 23 holes.

At 13, Fischer will have another chance at it next year. After finishing runner-up in his first appearance, he feels confident he can put his rounds together a little better and have a good chance next year.

“On this course, all of the parts of your game have to be good. I definitely wanted to win. I think I know exactly what I’ll need to work on to be able to win. This is a perfect kind of golf course for this type tournament and really tells you what kind of player you are and what the strengths and weaknesses are in your game.”

Maglisco will be too old to defend next year, but achieved what he set out to and will hopefully continue to ride his momentum.

“It’s a big accomplishment, something I was hoping to do and I achieved my goal.”