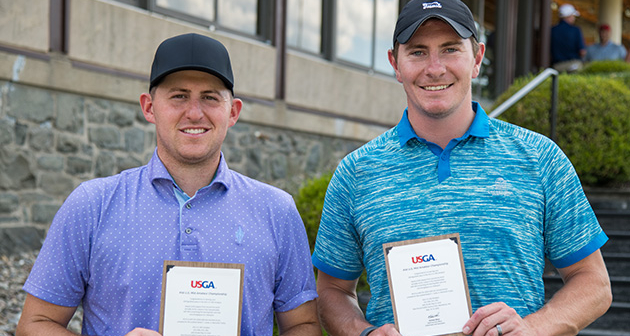 Lowe, Downey and Mactas Qualify for 41st US Mid-Am at Mohawk GC

He turned at 2-under after birdies on Nos. 3 and 5, and separated himself from the pack on the back nine with consecutive circles on 12, 13, 14. He finished with one more inside ten feet on the home hole.

This will be Lowe’s first appearance in the national mid-amateur. He regained his amateur status recently after testing the pro ranks for a short period.

Kyle Downey of Fairport and Jared Mactas of Woodcliff, New Jersey both shot 2-under 69 and will join Lowe at this year’s USGA championship at the iconic Erin Hills.

This will be his second U.S. Mid-Am appearance. He reached the match play Round of 64 in 2018.

Mactas, who regained his amateur status in 2021, converted seven birdies, three bogeys, and a double. This is Mactas first appearance in a USGA championship.

Mark Mumford of New York City is First Alternate and finished at 70, knocking in a birdie on the final hole to finish under par.

Second Alternate is Eric Williams of Honesdale, PA who matched par with a 71.

The 1904 Devereux Emmet layout was setup at 6,681 yards for the qualifier.