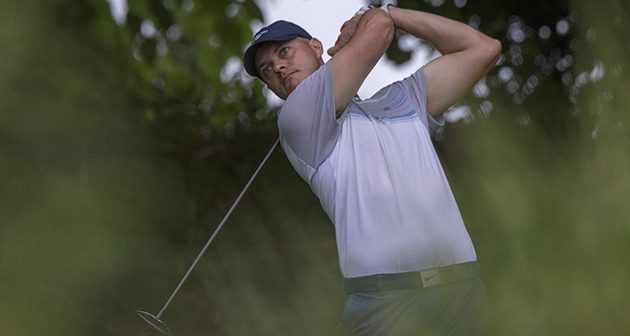 The 35-year-old out of nearby Locust Hill Country Club, was one stroke better today than yesterday carding a 2-under 70 and currently sits at 3-under 141.

Joining him in the final pairing will be last year’s runner-up Will Thomson, who also belongs to a nearby club, Oak Hill Country Club. Thomson scored better than yesterday, carding a 70 and is one stroke back at 142.

Currently tied in third, is Chris Blyth of Mendon Golf Club and Jay Card of Gardiners Bay Country Club. The pair are both in red numbers, at 1-under 143.

At even par is Daniel Griffiths of Binghamton Country Club, who carded consistent 72s to open.

Christian Chapman of Ravenwood Golf Club, and Robert Diforio of NYSGA eClub – Mid Hudson, are at 145.

A 36-hole cut was applied to the field and fell at 8-over 152, with 42 players advancing into tomorrow’s final two rounds.

Last year, Condello was the leader heading into the final two rounds at Bethpage State Park’s Black Course, and maintained his lead through the finish. Thomson, however, came very close in the fourth and final round, but fell a stroke short at the end.

This time, things are a little different, as the two will be paired together for the final 36 holes, whereas last year, they were two groups apart.

“Last year I struggled coming in and definitely got a little tired after the long day," said Thomson. "I think it would have made a difference if I knew what was going on. My bad shots felt worse because I was thinking he was making pars and birdies, but he was struggling a little bit too. It definitely won’t be like a match play situation, but hopefully we’ll both play well and it will be a fun day,” said Thomson.

He was age 16, and put together two impressive sub-par rounds of 69-70 on the deteriorating Black Course to close a six-stroke gap between him and Condello. In the final round, he had a magical start, and went out at 32, but bogeyed four out of the final six holes on his way in.

Condello, who matched 72s on the final day to win the title, will not change his game plan, or let himself worry about what’s going on until the final stretch tomorrow.

The Rochester-native is very familiar with the layout and knows how demanding the Donald Ross design can be with tricky false fronts and tough undulating greens across the course. “There’s spots out here where you just can’t go for a pin. I know the holes where I’m not going to think about it. If the pins in the back, I’m not even going to try to make birdie,” he mentioned about his tendency to spin the ball back on the green 10-20 feet on his approach shots. “It’s very demanding on the greens. You take it for what it is.”

Jay Card, who spends most of his time caddying at National Golf Links of America in Southhampton, is on the other side of the bag this week and although he shot 1-over today, is still under par for the championship.

“I had too many three-putts that kind of dragged me down. It just gets frustrating after a while, and then you start to doubt the putter. The short ones begin to look even longer. I just wasn’t firing on all cylinders,” he mentioned of the round.

Tomorrow, he intends to navigate the course a little cleaner, and will stick to the advice he gives a lot of the players he loops around with on Long Island. “I always tell my players, go with their gut instinct and that’s what I try to do when I’m out here. Whatever your first initial read, whatever your first thought is on club, yardage, shot around a green…go with that and trust your instincts.”

He felt like didn’t do enough of that today. “I was trying to play the number game in my head instead of just making a decision and sticking with it.”

Thomson also feels he hasn’t brought his best game to the table yet this week. “I think I can definitely find a few more strokes pretty easily. I feel really good about my game and am happy with the way I’m scoring so if I get a feel with everything it should be really good.”

Blyth, who grew up playing Monroe Golf Club, another Donald Ross classic just on the other side of town from Irondequoit, played a much different game today than yesterday, although posted the same number of 1-under. “Yesterday I was hitting fairways and greens. Today was a little more about grinding it out. It was a lot more getting up and down today. “

He won the Rochester District title two weeks ago on Monroe, and has continued his success this week with his tactical approach to the architect’s designs. “Play to the middle of the green and stay patient. Make birdies when I can, but get pars and be consistent. I’ll hopefully take that into tomorrow and see what happens."

Griffiths, who finished with two 72s to open and is just three strokes back, will be paired with Diforio in the final two rounds. Griffiths began slow, bogeying three of the first four holes today but finished with an eagle on the final hole to keep him close and gain some momentum headed into Thursday. “I think my slow start was mainly putting, it was holding me back in the beginning. As soon as a couple putts dropped that got the ball rolling for me.”

He finished T-12 at last year’s tournament, and closed with his best two rounds of the week, including a 71 in the fourth and final round. “After doing well at the black last year, it definitely gives me more confidence this year.”

Hole-by-hole scoring will continue throughout tomorrow’s third and fourth rounds, and you can follow along as the field battles for the coveted Ganson Depew Cup.