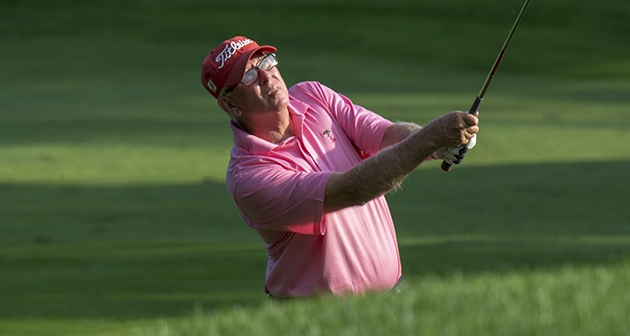 Cooper fired a 2-under 69 in the afternoon wave and is now the solo leader at 139, while Hughes posted another 70 to fall a stroke back at 140.

Joining them in the final pairing tomorrow morning will be Jim Mueller of Orchard Creek Golf Club who came in with a 70 today to climb into contention at 2-over 144.

Tied at 147 with Arakelian is Michael McNulty of Park Country Club and Wade Sarkis of Canandaigua Country Club.

Michael Dunsmore of McCann Golf Club turned things around today, firing an impressive 2-under 69 today after an opening 80 to survive the two-round cut.

The greens were cut and rolled this morning, and the course was able to dry out after yesterday’s heavy rain, improving the speed and roll on the surfaces around the Devereux Emmet design.

“The swing feels really good, I’m seeing the line. I’m standing over putts and feeling like I can make them,” Cooper mentioned about his two stellar rounds of 70-69. “The faster the greens, the better I like them. Firm and fast I love. I feel good.”

Recent champion Pratico, was happy to see the greens firm up today as well. “I had a lot of opportunities close yesterday that I didn’t make. The greens were a big difference.”

The cut was applied to the low 50% of both championship fields (including ties) and fell at 158 with forty players moving into tomorrow’s final day of competition.

Jim Hamburger of McCann Golf Course maintains his first-round lead in the super senior division after posting a 74 for a total of 4-over 146.

One back is Larry Arliss of Wayne Hills Country Club at 147, who went 73-74 the last two days.

Past champion Charles Connolly of Kingsbury National Golf Course and Mark Bonner of Country Club of Buffalo are four strokes back off the lead at 150.

Hamburger had a slow start with bogeys on two of his first four holes, but grinded through the round to stay atop the pack.

“I was a little shaky at the beginning, but I got it together. After the way I started, I was very happy with 1-over after nine holes. I’m an amateur, I make mistakes. I’m just trying not to compound the mistakes.”

Hamburger hopes to continue his high level of play into tomorrow and has been playing some very good golf recently. “I feel pretty confident right now that I know where the ball's going.”

Past Senior Amateur champion, Don Van Gorder is only three shots back and won’t be in the final pairing with Hamburger, Arliss and Tomaselli, but hopes to minimize mistakes and have a shot at a super senior title.

“I was pretty solid but I had a few mental lapses. If I can avoid those then I might have a chance. We’ll see how tomorrow goes.”

The cut fell at 157 with twenty-five players advancing into tomorrow’s final 18 holes of the championship.

The field will be re-paired in threesomes for the final round based on score, and tee times are scheduled every ten minutes from 8:00am – 9:40am, off both #1 and #10.