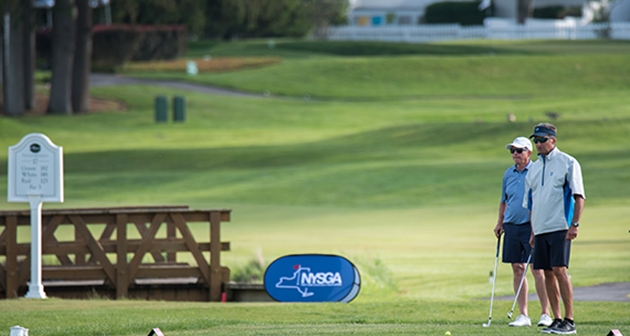 COOPERSTOWN, N.Y. – Ten groups are within four strokes of the lead after the opening round of the 10th NYS Men’s Amateur Four-Ball Championship hosted at Leatherstocking Golf Course in Cooperstown.

The Capital Region duo finished 7-under in the last six holes, including eagles on Nos. 15 and 18 to take the early advantage.

“We got off to a decent start, then it started raining. Then we kind of just went on a run,” said Gifford, referring to the pretty scoreable finishing stretch of the golf course which includes three shorter par 4s, and two par 5s.

After several impressive holes by Gifford, Russo capitalized on the home hole for his team by stuffing his second shot on the par 5 to five feet and knocked it in for the eagle to push them into the top spot.

“He’s fun to watch when he gets it going. Sometimes I think I do it too much, watch instead of play,” Russo joked.

Joining them in tomorrow’s final pairing is Brad Monroe (Lakeshore Yacht & Country Club) and Kevin Vandenberg (Tuscarora Golf Club) who sit one stroke back at 65.

The pair out of Syracuse also capitalized down the stretch, as the weather cleared up with six birdies in their final nine holes to get into the leader group.

“We made one birdie putt over five feet, and that was on seventeen,” said Monroe. “We didn’t make any bogeys though, which is always good.”

Michael Dwyer and Michael Stopera (Edison Club) are four strokes back at 68.

Tee times for Monday’s final round will begin at 7:40am, with the final pairing teeing off at 1:54pm. Winners will earn an exemption into the 2021 NYS Men’s Amateur at Schuyler Meadows Club in August as well as the NYS Men’s Mid-Amateur at Shaker Ridge Country Club in September.

They had a bogey-free card, and managed four birdies along with consecutive eagles on holes 14 and 15 to give themselves a slight cushion entering the final round.

“Kenny made a really good par putt on one, which kept us from getting in that negative mindset from bogeying the first hole. Then the magic happened on 14,” said Sarkis, referring to the driveable fourteenth hole. “We both had eagle putts and mine went in, then he chipped it in on the next hole and we grabbed four shots just like that.”

Joining them in the all-Rochester final pairing is Mark Battle (Ravenwood Golf Club) and Chris Sorci (NYSGA eClub – Rochester) who collaborated for 5-under 67.

Battle is the current president of the Rochester District Golf Association and won the Senior Four-Ball title in 2013 with a former partner Bob Chalanick.

“This is our third event. We haven’t really played much together at all. He hooked up with me sometime last year and we finished third in our first tournament with absolutely no putting. We both hit it pretty solid, we have plenty of distance, so I thought, why don’t we make it a team?”

Tee times for Monday’s final round will begin at 8:35am, with the final senior group teeing off at 1:43pm.