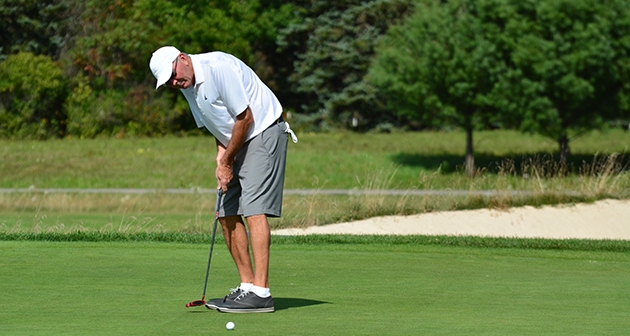 EAST AURORA, N.Y. -- In the opening round of the 2017 NYS Men’s Senior Amateur & Super Senior Championships, one player from each division registered even-par 72 on Crag Burn Golf Club’s tough layout to lead their respective fields through eighteen holes.

In the 61st Men’s Senior Amateur, Glenn Stopera began his morning 2-over through four holes, but pushed through his early mistakes and finished with a 72, two strokes ahead of the field.

Dennis Lynch is alone in second at 74 (+2) after battling back into contention with three consecutive birdies on 14-15-16, shooting a 3-under 33 on his way in.

Fourteen players are positioned within four strokes of the leader, and a lot of names are likely to shift around the leaderboard over the next 36 holes of competition.

When asked about his expectations heading into this week’s championship, Stopera mentioned he had very little. “If I can keep it together mentally, I can play good,” he analyzed. “I kept it straight, struck the ball well and if I found trouble, I got out of it.”

Stopera, a NYSGA eClub member from the Capital District, was 2-over through his first four holes (Nos. 10 – 13) today, but navigated the rest of the course with nothing but pars and birdies.

Along with Stopera, Lynch too had similar struggles to begin his morning.

“The highs were the back nine today. It’s a little more open and I didn’t miss a fairway,” said Lynch. “I lost a couple of balls on the front,” referring to his two doubles and two bogeys en route to an opening-nine 41.

The Nassau Players Club member out of Long Island, hasn’t played the course since the NYS Mid-Amateur was held at the host club in 1999. His excitement for the venue is what drove him back to the club, and into his first appearance in the NYS Men’s Senior. “I love the golf course, it’s worth the 8 ½ hour drive,” Lynch mentioned.

Another Crag Burn member and past state champion, Frank Broderick, is currently in fourth at 74 (+2).

Bob Coffey, of nearby Springville Country Club, holed out on the par-3 fifth hole today in dramatic fashion. Coffey took a nine iron from 122 yards out and dunked his ball directly into the cup to add a nice highlight to his day.

Smith, who recently competed in the US Senior Amateur at the historic Minikahda Club in Minneapolis, has played in more than a handful of USGA events and major tournaments over the years and feels little pressure being the man to beat this week on his home course.

“I hit sixteen greens, but didn’t putt very well. It’s usually one of the stronger parts of my game,” said Smith. “The course was setup fair. Probably six tough ones, six easier ones and six in the middle. I made a couple of unforced errors on the back nine (his front),” referring to his bogeys on Nos. 10, 13 & 16.

Smith’s game plan through the next two rounds of stroke play is simple. “Stay patient and hit fairways and greens.”

Tomorrow, the 132-player field will again be divided into morning and afternoon waves off both tees #1 and #10. After the second round, the field will be cut to the low 50% and ties in each championship division for the final 18 holes of competition on Thursday.