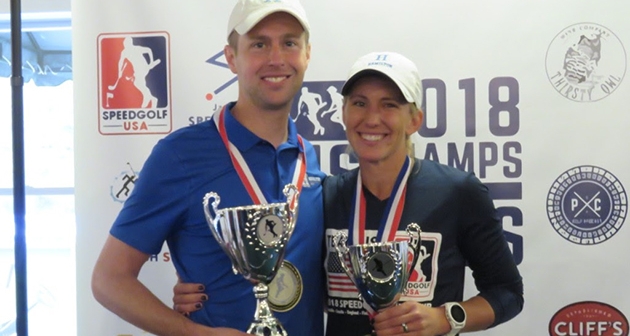 The 2nd annual US Speedgolf Championships were hosted by Central New York’s Rome Country Club. Husband and wife, Wesley and Lauren Cupp of the host club, captured national titles in the men’s and women’s divisions respectively.

"Everything lined up perfectly, the putts went in and it was a story book ending," said Wes, who collected $1,500 for the victory while Lauren competed as an amateur.

Cupp put together another strong performance on Monday, to take home her first women's world championship title at Shenendoah.

“I'm just elated to win my first! With the amount of women increasing in our sport it was very satisfying to finally break through and take home the title. Also, a special thanks to the ISGA and the host courses' grounds crews for putting together a great weekend despite the tough weather conditions,” Cupp mentioned after the victory.

Lauren, is the golf coach for nearby Hamilton College and is a top Mid-Amateur player on the state circuit, winning the NYS Women’s Mid-Am in 2017 and finishing as co-runner-up this past summer. Frequently at NYSGA championships, her husband Wesley, is on bag duties as her caddy.

He ended up finishing in 5th overall at the World Championships at Turning Stone, about six minutes back from champion Mikko Rantanen of Finland.

Speedgolf is a hybrid sport that debuted in the mid-1970s and has evolved under the organization of governing bodies in recent years like USA Speedgolf and the International Speedgolf Alliance (ISGA). The sport promotes a fun, faster, fitness-promoting alternative to the traditional game and can be played in a fraction of the time.