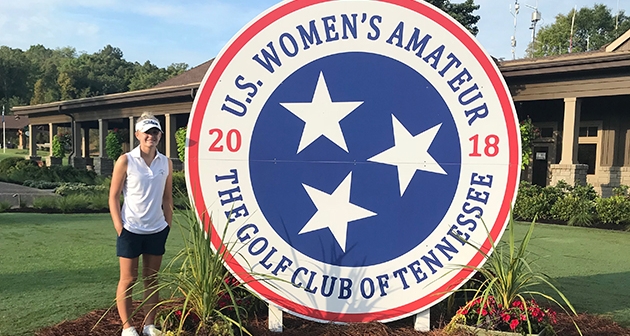 Kim-Schaad & May Compete at The Golf Club of Tennessee for 118th U.S. Women's Amateur

Both players were unable to advance through the stroke play rounds, however Kim-Schaad’s 3-over 145 fell right on the cut line. She faced off against nine other players for sixty-fourth spot in the match play bracket, and was knocked out with a par on the second playoff hole.

Kim-Schaad, of Deepdale Golf Club, opened with a 2-under 70 the first day to set her up in great position to advance, but couldn’t maintain her position under par the second day after a 75.

May, the 2016 NYS Girls’ Junior champion who plays out of Owasco Country Club, carded a pair of 77s to finish at 154 on the Fazio design.

Kim-Schaad qualified for the championship in dramatic fashion as she was the last woman in at her qualifier at Hackensack Golf Club in Oradell, N.J. She posted a 71, and battled her way through a 6-hole playoff to capture the fifth and final advancing spot.

May finished as first alternate at the Shaker Hills Golf Club qualifier in Harvard, Mass. with a 70, and received her call into the championship while competing in Poppy Hills, California at the U.S. Girls’ Junior in Mid-July.

Next year, the U.S. Women’s Amateur will head to Old Waverly Golf Club in West Point, Mississippi next August 5-11.