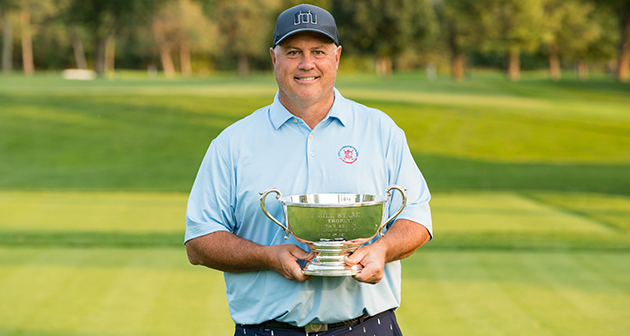 SPRINGVILLE, N.Y. -- Once Kevin VandenBerg stepped onto the course at Springville on Thursday afternoon the outcome of the 65th NYS Men’s Senior Amateur Championship was never in doubt.

The member of Beaver Meadows fired the tournament low round on day one, a 5-under 66, and carried a six-stroke lead into the final round. All he had to do on Thursday was avoid major mistakes and he would likely walk away with his first NYS title.

While his round two performance was not blemish-free, the rest of the field could not close the significant gap he opened on Wednesday.

The three-time Michigan state champion and recent Senior Porter Cup winner turned in a 73 on Thursday, which was more than enough to secure the title. He finished at 3-under 139 for the tournament.

“I was second last year to Dan, but it feels really nice to get a state championship under my belt.” VandenBerg said. “Hopefully I’ll get a couple more in the next few years, but it feels good.”

The top five finishers in the Senior Amateur earned exemptions into the upcoming Mid-Amateur at Seven Oaks as well as the Men’s Amateur next year. Four players tied for second to join Vandenberg on the exemption list.

“To come out here and be able to do this is great,” Smithers said. “I’m really happy about it.” 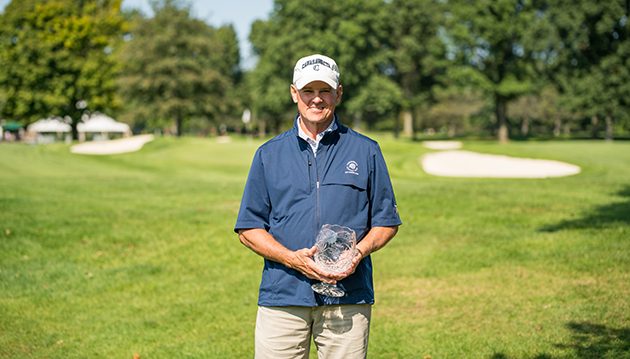 The 26th NYS Men’s Super Senior Amateur Championship produced one of the most exciting finishes of the season at Springville Country Club on Thursday.

Paul Hoffstetter, who led after round one, was holding onto a two-stroke lead down the stretch at his home club. Canasawacta Country Club’s Bob Branham and Bob DeWitt, of Transit Valley Country Club, both looked on from the clubhouse.

Both players sat at 5-over 147 and after Hoffstetter bogeyed the par-3 17th, were just one stroke back of the lead.

Hoffstetter’s fourth shot on the par-5 18th found the greenside bunker. He was unable to get up and down and finished with a double bogey to fall to 7-over for the tournament and tied for fourth place.

2014 champion Randy Young, of Bellevue Country Club, had a chance to slide into a playoff with Branham and DeWitt but his birdie putt came up inches short and he would finish in solo third place.

The par-5 18th hole would be the scene for the playoff between Branham and DeWitt to decide the champion.

Both players hit their drives down the center of the fairway, within 20 yards of each other. They each hit their second shots into the rough.

DeWitt ended up to the right of the fairway and about 50 yards short of Branham who was in rough separating the split fairway just short of the green. The Transit Valley member caught a flier and his third shot landed in the same bunker that ended Hoffstetter’s chances.

The 2017 NYS Men’s Senior Four-Ball champion Branham put his third shot to within 10 feet, giving himself a chance to seal the deal. DeWitt’s bunker shot would not help his chances as he found the rough on the opposite side of the green.

DeWitt could not chip in which left Branham with an opportunity to two putt to win. He did just that and brought home his second NYS title.

“To finally get a singles title was fantastic,” Branham said. “It kind of validates everything, makes it full circle. I’d like to go back and win the rest of them, but I’m happy to get this one.”

Branham’s second round was the low round of the tournament. He was 1-under on the day and was the only player in the super senior division to go under par. He needed a low round to climb back in after a first round 77.

“I always believe there’s a chance,” he said. “Tee-to-green I feel like I can play pretty much anytime with anyone.”

DeWitt also clawed his way back in to give himself a chance in the playoff.

“Bottom line, I’ve never been crazy about winning or losing,” DeWitt said. “If you win, fine. If you lose, fine. It’s just about if you can hit that shot at that time and control your emotions.”