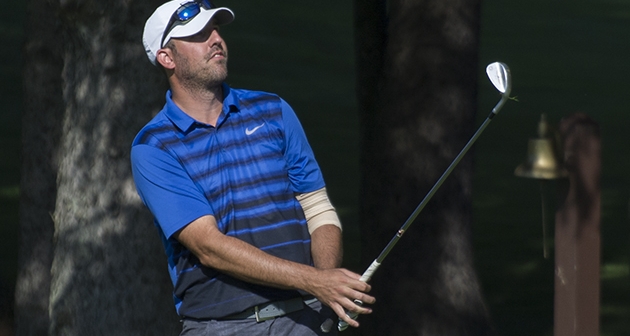 New Hartford, N.Y. – Patrick Keegan fired a record-tying 5-under 66 to surge into a two-stroke lead entering tomorrow’s final round of the 34th NYS Men’s Mid-Amateur.

Keegan, of Locust Hill Country Club, tied the Mid-Amateur Championship lowest single round record 66, which was initially set by Adam Condello of the same club, at Teugega in 2014. Condello’s 66 was in the second round of that Championship as well.

“I wish it was tomorrow and I was holding the trophy but it was great,” he said about the accomplishment.

Yesterday’s leader Tim Spitz, of Monroe Golf Club, shot a 72 today and is even-par through 36 holes at 142.

Devlin Walsh, an NYSGA eClub – Mid Hudson member, is also at 1-over and will join Spitz and Hobika in the penultimate group.

This year’s NYS Men’s Champion, Adam Condello, turned in a 4-under 67 today to rush up the leaderboard after an opening round 77 put him towards the bottom of the pack after 18 holes. He is now tied for seventh.

The course played at a shorter distance of 6,544 yards today, including a drivable 288-yard par 4 twelfth hole. Six players finished under par at the shorter distance, whereas only yesterday’s leader spitz, accomplished the feat in the opening round.

Through the front nine of the course, it seemed as if it would be a battle for the lead between Spitz and Goldstein, who were in today’s final pairing. The duo traded leads a couple of times throughout the opening side of the course.

Keegan made the turn two strokes behind the leader at the time, Spitz, before having a special three-hole stretch which ultimately propelled him into his current position.

On the eleventh hole, he left a 4-iron short of the green on the 220-yard par 3, but chipped in for birdie. “If that didn’t go in, it could have easily been a four,” said Keegan.

On the next hole, a drivable par-4 today, he missed the green to the right, but converted his up-and-down for another birdie. His best shot of the tournament (so far), came on the 115-yard par 3, where he choked up on an 8-iron and feathered one into the wind that landed in line with the flagstick and almost rolled into the cup. He tapped in his birdie for his third circled number in a row.

“Then it started to get real,” Keegan said about his 3-hole, 3-under stretch.

Keegan began the tournament 4-over through his first seven holes of the championship when he bogeyed Nos. 10, 11, 15 and 16 yesterday, (he began on #10), but has played the course at 8-under since. “Once I get past the first few holes it’s just another round of golf. I hit a lot of greens and left a lot of shots close to the hole,” he mentioned about his steady progression.

He credited some of his focus and excellent play to his pairing. “I think our group shot 8-under today. One of us made a birdie on every hole from eight through fifteen,” referring to his good friend Kyle Downey and Kevin VandenBerg, of Tuscarora golf Club, who’s now tied for seventh.

Goldstein, a notable amateur from the Metropolitan area, has won a couple of Long Island Golf Association titles in recent years and qualified for the last three US Mid-Amateurs (’15, ’16, ’17), began the morning strong with two birdies off the bat and maintained his score the rest of the way.

“The few times I made bogey today, I got into trouble off the tee and had to play for five. I’ll try to get the ball in the fairway a little bit more often and give myself some looks tomorrow,” said Goldstein.

Condello, who swiftly got himself back into the mix, felt his putting was the major difference between today and yesterday’s round on the Walter J. Travis signature greens. “I was able to get some to go. I knew it had to be a lot better.”

Condello, the 2017 NYS Men’s Amateur Champion, had a chance of also tying his record 66 today with birdie opportunities on seventeen and eighteen, but couldn’t connect on either.

“I definitely thought about it on the seventeenth,” he said about coming close to the number again. “Maybe I’ll get it tomorrow,” he said half-jokingly.

The second-round cut fell at 151 (+10) with 31 players advancing into tomorrow’s final round. The field will be paired into threesomes teeing off from 8:10am – 9:40am, from the highest to lowest scores with the leaders at the back.

There will be live hole-by-hole scoring for the entire field, which you can follow through our championship website on Golf Genius.