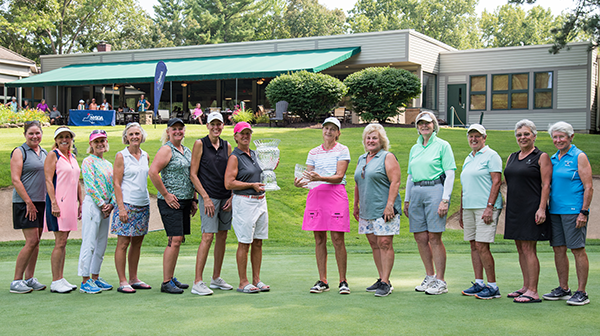 This title marks Kaul’s third senior championship, with her first two coming in 2008 and 2015. It was especially meaningful to her because she lost in a playoff in the 2018 championship at Thendara Golf Club.

“Three years ago I felt I gave the championship away,” Kaul said. “That was my last tournament because I had surgery then COVID so I’ve been wanting to get back to this and claim the title again.”

In regards to her round, she added, “I’m just very pleased at how I played and held it together. Yesterday I had two double bogeys and just bore down and made a couple birdies so that really helped culminate yesterday's round. Then today I only had one real bad mistake.”

Kaul, a member at East Aurora Country Club, entered the back nine tied with Teresa Cleland of Bellevue Country Club at eight-over. She bogeyed on ten, but responded with two consecutive pars and a birdie on thirteen to get back to eight-over.

On the other hand, Cleland suffered a pair of bogeys and a double-bogey on thirteen, allowing Kaul to open a three-stroke lead with five holes remaining.

“That was probably where I gained an advantage,” Kaul said. “I’ve know T since college and we’ve known each other for a really long time, but in the cart together we are each other's support and rooting for each other, so it’s interesting because you’re competing against somebody but they’re also cheering for you too...that’s the kind of person T is.”

Her one mistake that she mentioned on hole nine was her only double-bogey of the round. She chunked a chip shot, then two-putted the par-three hole.

“Other than that my short game was really sharp today,” Kaul said. “I missed one putt that I should’ve made so other than that I just tried to stay in the moment.”

There was one point in her round yesterday where Kaul thought that she had played herself out of the tournament. She began her back nine with consecutive double bogeys. After checking the leaderboard, she was pleased to find out that she was near the top, and helped her lock in for the rest of the round. She carried the momentum into today’s round, and sat atop the leaderboard at the end.

“It got my thoughts collected and got me back on my game,” Kaul said. “I’m just very pleased. I’ve played a lot of competitive golf over the last couple weeks, I’m exhausted so I’m just happy to have claimed the title this year.”

In the concurrent Super Senior Division for women ages 65 and older, Mary Jo Kelly of Wolferts Roost Country Club shot 14-over 158 to capture the title.

This was Kelly’s second state championship; her first came at the 1980 NYS Women’s Amateur at Foxfire.

“It does feel good,” Kelly said. “I really wasn’t thrilled with how I played but a win is a win. I got it done.”

Her best stretch came on holes thirteen through seventeen in the final round, where she posted a pair of birdies and three pars after bogeying her first three holes.

“That kind of settled me down for a few holes until we made the turn,” Kelly said. “Then I struggled, I made par getting up and down on my tenth and eleventh holes and then I had a couple bogeys then I settled back down. The double bogey rears its ugly head occasionally.”

She noted that she struggled with short irons shots, and got nervous as she got closer to the green, similar to her round yesterday.

“The nerves creep into your wedge shots around the green and you chip poorly then you're struggling to putt,” Kelly said. “It’s just nerves.”

Though she was able to build a lead as big as five strokes to coast to her first Super Senior title.

“I hemmed and hawed about which division to get in to, and I think I made the right choice,” Kelly said. “It’s fun to test your game...hopefully I’ve taken something away from here and can learn.”

She did find the course advantageous, given she’s been playing events at Pinehaven CC since she was a teenager.

“I loved the course. Pinehaven was great,” Kelly said. “I’ve been playing here over the years in junior events, then adult events and now super senior events so I’m pretty familiar with the course.”

Deborah Enders of Links at Erie Village finished runner up at 160, while Leslie Arakelian of Orchard Creek was third at 161. Lynn Quinn of Clifton Springs Country Club (166) and Kathy Harkins of Ballston Spa Country Club (167) rounded out the top five.