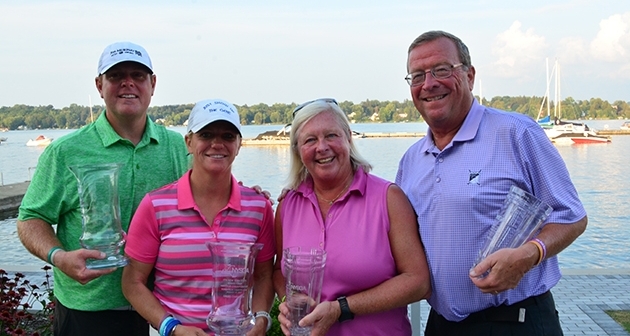 Alexandra & Mark Battle, a father-daughter duo out of Ravenwood Golf Club, combined for an eagle on the eighteenth hole to finish with a 1-over 72 and force the extra holes against the couple from Buffalo. Unfortunately, during the playoff, the Rochesterians were unable to repeat the home-hole achievement.

The playoff began on the first hole, a 184-yard par-3, where both teams had chances for a deuce but neither could capitalize. On the next, the par-5 second, the twosomes went birdie-birdie to extend the playoff to a third and final hole, the par-5 eighteenth.

Kim & Rick Lloyd of Shaker Ridge Country Club finished in the third spot with a 75 (+4).

Last year’s winning team, Andrew Conway & Sara Eichelberger of Ravenwood Golf Club, registered a 5-over 76 to finish tied for fourth with Lynn & Mark Hylwa of Seneca Falls Country Club. They were paired with the Battles and teed off #1 during the shotgun start.

The Murphys, of Brookfield Country Club, who began their day on the second hole, dropped a few shots early with bogeys on the third, seventh and tenth, but recovered with birdies on Nos. 5, 6 and 8 to remain at even-par through the turn. On the way in, they picked up a birdie and two bogeys for a 72 (+1).

Winners were also decided for best net score in each division. James Lanzillo & Jan Ricci of Durand Eastman Golf Course, finished with an 8-under 63 net (89 gross) to win the Open Division category.

A Senior Division ran concurrently at a shorter distance than the Open Division on Monday, with 29 teams of men (55+) and women (50+) participating in the Championship.

Patty & Jim Schaefer teamed up for a skillful 6-under 65 to win the 5th NYS Senior Mixed Team Amateur Championship by three strokes over the field.

The couple from Yahnundasis Golf Club in Utica, tallied up six birdies, two eagles and limited their mistakes to the front side, where they posted four bogeys.  They cruised through a bogey-less back side for a clear path to victory, finishing their final nine at 29 (-6).

Coming in second was Frances & Stephen Scoville of Binghamton Country Club, after carding a 68 (-3). Although they came up just short of the title, they earned the top spot the Senior Division net category with an 11-under 60.

The format of this championship was 18 holes of modified Chapman stroke play, gross and net, as follows: two players play as partners, each partner plays from the teeing ground and plays their partner's ball for the second shot. After the second shot, the partners select which ball they wish to score with and play that ball alternately to complete the hole. On par three holes, the choice of which ball to play alternately must be made after the tee shots.

A team’s handicap was determined utilizing 60% of the low player’s Course Handicap, and 40% of the higher player’s course handicap.

Tees played for each division were as follows: