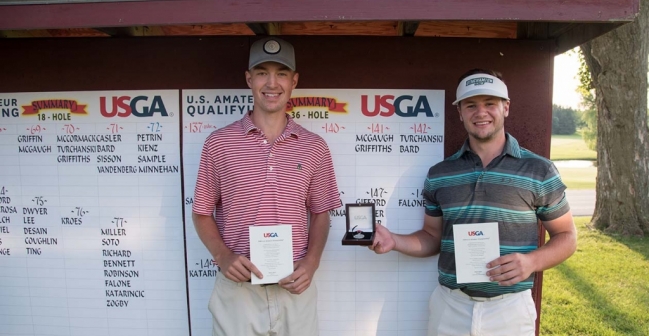 Both players will advance to the 119th U.S. Amateur Championship in August. The USGA-conducted championship will be contested at Pinehurst Resort & Country Club (Course No. 2) in Village of Pinehurst, North Carolina.

McGaugh led the field three-under after the first 18 holes. Speaking on what went well for him, McGaugh said, “My driver was great. I made the putts I needed to. It kept me in there and kept me confident.”

Griffiths, a rising junior at Binghamton University, explained the challenges of adjusting to play outside of collegiate tournaments. “I probably haven’t played a tournament since my last college season, so I didn’t know what to expect. I went out there and everything was really feeling good for me,” he said.

Both players will make their first appearance at the U.S. Amateur after trying to qualify multiple times.

McGaugh, a Hamilton native, spoke about the advantages of qualifying on his home course: “I have a bunch of people who come out every time I play here. It was great to have them here and actually qualify. All those years, 16-17 years of golf, and now I’m actually doing it.”

Tyson Turchanski of Canada and Alec Bard of New Hartford competed in a two-hole playoff for the alternate positions. Turchanski captured the first spot, while Bard secured the second and final spot.