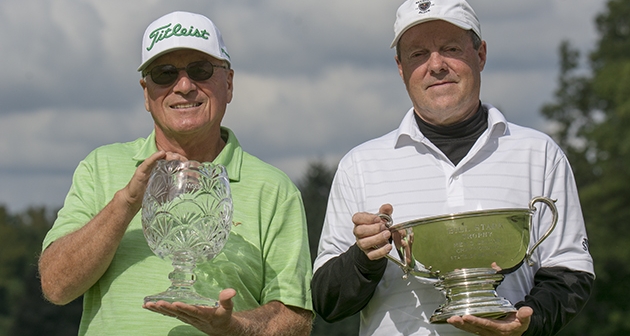 His opponent, Wade Sarkis of Canandaigua Country Club, fired a 3-under 68 in the final round to force the extra holes, after both finishing the championship at 2-over 215.

Coming in third, was Jim Mueller of Orchard Creek Golf Club at 216. Michael Dunsmore of McCann Golf Course came in fourth at 217, and the leader through 36 holes, Bob Cooper of Schenectady Muni, ended up in fifth at 218.

The newest NYSGA champion out of Ives Hill Country Club, made his lone double-bogey of the tournament on the 54th hole and was five strokes worse today than the two opening rounds.

“I didn’t know there was a 68 posted. My two buddies said I had to two-putt (on eighteen green). I thought that shouldn’t be a problem, I was only at 15 feet. Then I just made a poor stroke.”

The playoff began on the eighteenth hole just minutes after Hughes walked off with a six. Sarkis on the other hand, had been waiting for the groups behind him to finish to see where his number would fall on the leaderboard.

Both players hit the green in two, and two-putted for their pars. They moved to the tough opening par-4 at the Devereux Emmet course, and placed their second shots onto the green, both rolling off the back.

Hughes elected to chip, while Sarkis preferred to putt his ball. They each left their strokes close to the flagstick, convincing the gallery the playoff would head back to the eighteenth hole.

Instead, Sarkis lipped out a four-footer and the championship was Hughes to win. He quickly lined up, and knocked his down to secure his first New York State title.

“I thought I had a really good shot on #1, and it just hit and released. I hit a good pitch, and it was unfortunate that Wade missed his putt,” said Hughes.

“It was a complete surprise,” said Sarkis about the news of extra holes. “All of a sudden realizing I’m heading into a playoff for a state title.”

Sarkis was one of only two players who went under-par in the tough final-round setup.

“I’m very proud of how I kept it in play today and was able to maintain my focus. I wanted to keep that momentum and I did, so I was pleased with that. Getting into the playoff was certainly a bonus.”

Hughes, as well as the other two in the final pairing, Cooper and Mueller, were unable to post red numbers on Thursday morning.

The race for the Bill Stark Trophy however, was seemingly between that trio. At the turn, Cooper and Hughes were tied at even par, and Mueller had only fallen back a hole earlier when he doubled #9.

The iconic par-3 fifteenth hole at Mohawk is where things began to change. The two leaders were tied prior to the hole, but Cooper left his tee shot above the hole and ended up three-putting for bogey, while Hughes knocked in his first birdie of the round, a two-stroke swing.

“I got a little aggressive,” said Cooper about the three putt on fifteen.

The player from nearby Schenectady Muni, began to lose the rhythm he seemed to have all week, finishing bogey-bogey-double to fall down the leaderboard into fifth.

“It was a little disappointing. It seemed like I was always trying to play catch up today. It was just off a little bit,” he said about his game on Thursday.

However, he was happy with the finish and how he played overall. “It was a great week. My goal is top-10. If I can finish in the top-10 in everything I play in, how can I not say it was a great weekend.”

Dunsmore, of McCann Golf Course, who fired a 2-under 69 yesterday after an opening 80 to make the two-round cut, improved once again with a 3-under 68 and propelled unexpectedly up the leaderboard.

“I had a hard time with the speed and wasn’t driving the ball well,” he said about his opening-round score. “Then I became a little more comfortable. I missed one fairway in two days, so that was huge. Then the putter lit up. Everything just fell into place.”

Hughes, 57, has been searching for a New York State Amateur title for decades, but never in the Senior Amateur, until this year when he decided to register for the older championship.

“I didn’t play very well in the state amateur so I was looking for something to end the summer on a high note. I didn’t plan on winning, I just wanted to go out there and show I could play a little better,” he mentioned referring to when he missed the cut at the NYS Men’s Am in August.

He appeared in his first Men’s Amateur in 1981, where he was the runner-up to Syracuse’s Jim Roy of Wanakah. Since then, he’s had a couple more close calls but has never been able to get a state win.

He shared a very special moment with a longtime friend from the Watertown area, Steve Sboro, who was his caddy at the 81’ Men’s Am and was following him around the course today, and the two embraced after the winning putt.

“He’s like the older brother I never had. It was special, I almost wanted to win for him. It was pretty neat,” he said about the situation. “It’s really nice to finally win one of these things,” he said with a big sigh of relief.

In the 23rd Men’s Super Senior, for players 65 and older, Jim Hamburger went wire-to-wire to win his first state title by two strokes and finished at 7-over 220.

The runner-up Anthony Tomaselli of Yahnundasis Golf Club, ended up two strokes back at 222, although the two were tied headed into the eighteenth hole.

The player from McCann Golf Course (Hamburger), felt he had great control of the ball all week long and that was clear through his rounds of 72-74-74 on the tough Capital Area layout to finish at 7-over 220.

Like yesterday, he didn’t get off to a great start, doubling the opening hole and bogeying the next en route to a 40 on the front. Tomaselli on the other hand, was playing fantastic golf and had a stroke advantage at the turn.

Down the stretch, Hamburger started to click. “There were a lot of ebbs and flows, and most of them were not good. I was just trying to survive the best I could and make it competitive. I felt like I was on the ropes after the par 3 (12), but made the putt for par. Then I made a couple of birdies in a row. If he would have hit me with one more left, I think I would have been down and out,” he expressed.

The two were tied heading up the eighteenth fairway, and Hamburger finished with a birdie while Tomaselli made bogey.

“I reacted well today, just didn’t finish it off,” said Tomaselli about the battle. “Jim and Larry (Arliss) are great guys so we had a wonderful time out there. I’m thrilled, still very excited.”

Hamburger, competed in his first US Senior Amateur a couple of weeks ago in Oregon and has found something special in his game this summer. “I appreciate it so much because it’s unexpected. All of a sudden, things click.”

He was able to take that momentum and carry it into this week’s championship. “The birdie at the end made it special. I didn’t gag my way in, I did something to earn it. I played fairly well when I needed to and hung in there.”

Age group winners were recognized at the championship: