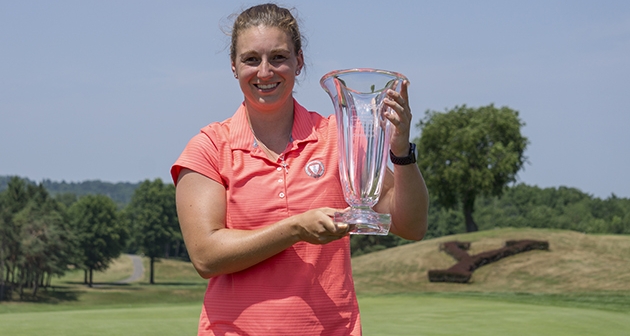 NEW HARTFORD, N.Y. -- A 1-under 72 during the final round, secured a ten-stroke victory for Jenna Hoecker at the 10th New York State Women’s Mid-Amateur Championship.

Today’s score was the lone under-par round of the championship and her opening round 74 was the second lowest. She finished with a 54-hole total of 221, two over par.

Tammy Blyth of Monroe Golf Club, who was in the final pairing with Hoecker and Cupp, had her highest score of the tournament today with an 82 and finished in fourth (went 76-76 in first two).

Hoecker was able to go wire-to-wire over the three championship rounds, padding her lead over the field each day. At age 25, this was her first year of eligibility in the Mid-Am division, and certainly made the most of it.

“It feels good. Going into every year you have goals of what you want to do each summer. This was my number one thing, I wanted to win the mid-am the first year playing in it. It feels really good to be able to cross that one off my list,” she said.

Five years removed from her last state title, daily routines have changed for Hoecker and the win feels a little different than the last one. “It was very different from playing in the state am. In 2013, I was able to practice seven days a week, worked at a golf course every day, and could play whenever I wanted. Now, I’m an accountant and play on the weekends when I can. It’s a lot different.”

Although it seems like a blowout victory, she was nursing only a one-stroke lead after the opening round which extended to three strokes after two. Today, momentum was on her side.

“My warm up was great, my putting was great. So going off the first tee I was really confident.”

Her only real stumble of the tournament, was a three-hole stretch yesterday going double-bogey-double on holes 3-5, but wasn’t enough to throw her off cadence, with four birdies and only two bogeys in the next twenty-two holes.

“I tried to play really solid through that stretch. I really didn’t know how much of a lead I had until I was on sixteen,” she mentioned of her focus throughout the final round.

With the victory, she is now one of two players to win both the Women’s Amateur and Mid-Amateur, the other being Christy Rittenhouse Schultz, a fellow member of Brook-Lea Country Club who competed in the amateur division this week.

“That makes it even more fun to have both of our names on two different trophies. It’s a special thing,” said Hoecker.

Cupp, who grew up playing Yahnundasis and lives around the area, had a special week herself at the home club.

“It was great to have so many women at the Yahnundasis this week. It was a really fun week for me. It was nice my family could come watch and my husband, Wes, was able to caddy for me. It was special to have it here for sure,” she noted.

Cupp’s opening round of 79 left her with a lot of ground to make up, and that was with a birdie and eagle within her last three holes on Wednesday.

From there, she was mostly playing catch up to try and get back into contention with the leaders.

“I had a bad first nine. One bad set of nine holes out of six which got me off to a bad start. I was trying to save some shots just to keep myself in it. My goal after day two was to get in the final group, which I just did, and then try to chase some people down.”

She entered the final round five strokes behind Hoecker. She was 1-under through the front nine, but had a few bogeys on her way in to close any opportunity to pressure Hoecker.

“I’d like to get off to better starts, that’s been my nemesis the last few years. I have one bad round and it happens to be the first round every time, and then I feel like I’m playing catch up. It’d be nice to get off to a better start next time,” she analyzed.

Kaul, who’s known as a great competitor around the New York circuit, was left unsatisfied with her tie for second. “It’s nice to play well and contend but my goal is to win. I need to play just a little bit better. I played with Jenna yesterday, she hits a nice ball and played steady so congrats to her.”

The senior player from Buffalo was runner-up in 2015 at Tuscarora Golf Club to Dani Mullen, and is hoping to eclipse the goal in the next few years. “It was a decent tournament for me, and I think it will help me with a few things down the road,” she said about her experience this week.