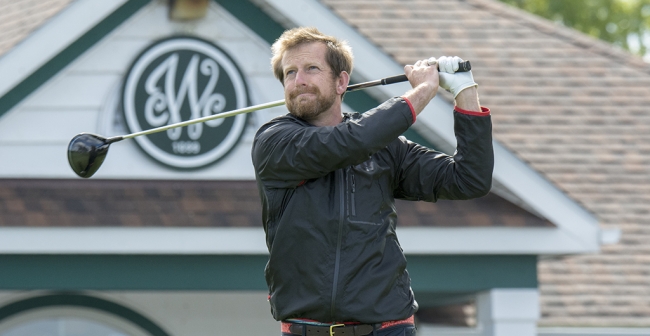 Hanes Stays Under Par Through Two Rounds at NYS Mid-Am, Leads By Three

HAMBURG, N.Y. – Through thirty-six blustery holes at Wanakah Country Club, Billy Hanes was the only competitor able to stay under par at the 35th New York State Men’s Mid-Amateur Championship.

Hanes, of nearby Crag Burn Golf Club, posted a 2-under on Saturday and sits three strokes ahead of the field at 142.

Two-time winner Jim Scorse of Stafford Country Club went 73-72 in the opening rounds and is alone in second.

Joining them in tomorrow’s final pairing is 2014 champion Jamie Miller of the host club, who pushed up the leaderboard with a 1-under 71 after opening with 75.

Dominic Formato of North Hills Country Club bounced back with a 70 after shooting 77 yesterday afternoon. He, along with Tom Linehan of Brook-Lea Country Club and Carl Schimenti of Cornell University Golf Course, are together at 147.

Hanes, who played high school golf at Wanakah, knew the field would have a hard time scoring today in the tough windy conditions, and was able to manage his shots well around the course.

“I played within myself, didn’t go after too much. I tried to keep myself in good spots and didn’t make any critical errors. I was just trying to get around because I know it’s tough and it’s hard for people to go low right now,” he said.

Hanes played with Downey and Nealon in the final pairing today, and the four-stroke deficit he was in yesterday, turned into a three-stroke advantage in only 18 holes.

He watched Downey make three doubles and two bogeys to change the storyline heading into Sunday’s final round.

“I think it always helps,” he noted about playing in the leader group. “It gets you feeling like you’re in the mix. So yeah it worked for me today.”

Hanes kept a clean card on the front side and knocked in two birdies to turn at 34. On the back, he slid a little bit, but knocked in a nice putt on eighteen for birdie.

The 32-year-old is in great position to add a fourth New York State title to his belt tomorrow. He’s won three NYSGA championships, including the NYS Boys’ Sub-Junior in 2000 at Wellsville, the NYS Four-Ball in 2015 with partner Jamie Miller and again this spring with his brother, David.

“I need to keep playing the way I’m playing and see what happens. I can’t get overaggressive or too anxious about the moment. It’s just another day of golf tomorrow.”

Like yesterday, Scorse got off to a hot start on the way out and turned at 3-under, but had trouble managing mistakes on the way in, more specifically on the tricky fourteenth hole.

“It had me both days and cost me some strokes,” he painfully mentioned about going bogey-double there so far this weekend.”

He fought back with a birdie on the seventeenth, but made another mental error on the last hole, dropping a stroke for a 72.

“Kind of a lackluster finish for how I was hitting it. Two little mental mistakes. Could have been just a hair better,” he said referring to the backside bogeys.

Scorse, who won the championship in 2016 at his club Stafford and 2013 at Onondaga Golf & Country Club, knows what it takes to win a state title (he’s won a total of five state championships). “It’s all about what you’re bringing that day. With us (amateurs), you never know. I want to get back in that groove tomorrow. Hit shots like I was hitting on the front nine and hopefully make a couple more putts.”

Downey on the other hand, couldn’t pinpoint what happened on the course today en route to his 78, things just never seemed to go his way out there.

“I just hit the ball like crap today. I missed a lot of 7-8 footers that I thought broke one way and they just didn’t.”

Today, he made ten more swings than yesterday’s round under very similar conditions. “It’s a funny game. I hit the ball very well yesterday and today I couldn’t turn it on. Tomorrow hopefully the swing shows up and we’ll see what happens.”