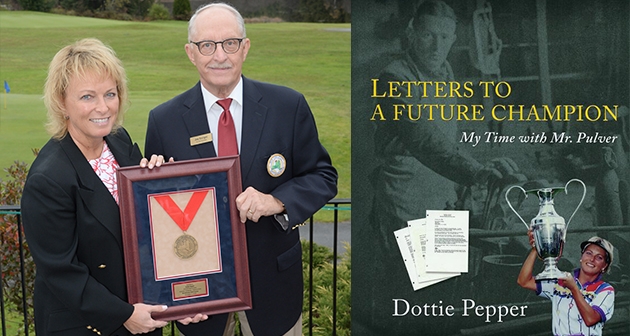 The former LPGA star and CBS Sports analyst, grew up playing golf in Saratoga Springs, where she was mentored by George Pulver, Sr. He was the longtime Head Professional at both McGregor Links and Saratoga Golf & Polo, designed local Brookhaven Golf Club and nine holes at Saratoga Spa, and was inducted into the Northeastern New York PGA Hall of Fame in 1995. Pepper claimed both the NYS Women's Amateur (1981) and NYS Girls' Junior (1981, 1983) during her teenage years under Pulver's guidance, and eventually grew to become of one of the most notable female figures in golf.

The book, published by Mission Point Press, is a loving tribute to the power a mentor can have in an athlete’s career. George J. Pulver, Sr., was a golf great in his own right – as a golfer, as a course designer, and as an advocate for golfing throughout the Northeast. But he took on the mantle of mentor when he and a young Dottie, age 15, began a teacher-student relationship that would stretch into Dottie’s college years.

In this beautifully crafted book, Dottie traces the influence “Mr. Pulver” had on her skills as well as her character both on the practice range – where Mr. Pulver dutifully watched every detail of her swing – and in the letters the two exchanged after. Mr. Pulver would sit down at his typewriter and carefully tap out a critique, or a technique, or advise on the life lessons Dottie would need to rise to the top.

Dottie compiled those letters into a binder and referred to them often ... her bible, of sorts, on her path to a future as a multiple winner and two-time major champion on the LPGA Tour.

“Filled with years of his mostly typewritten letters, it was my reference book for all things golf,” Dottie said. “But as time has gone on, I’ve come to realize the binder is much more. It is a blueprint for honoring the history and traditions of the game of golf; it also is about mentorship, beliefs, curiosity, grit, grace, dreams, disappointment, success, and the value of education.”

The book is being hailed by golf peers and fans alike as a fitting tribute to the power a mentor can have in an athlete’s life.

“It’s a must-read for anyone who loves the game of golf,” said Norah O’Donnell, CBS Evening News anchor and Managing Editor.

“Letters to a Future Champion is one-part diary, one-part instruction manual, all wrapped up in a page-turning scrapbook come to life,” said Jimmy Roberts of NBC Sports.

“Golf being among the loneliest sports, Dottie Pepper gives us a beautiful reminder that no one does it alone,” said Doug Ferguson, golf writer for The Associated Press.

Pepper will send 10% of all sales proceeds to the Saratoga WarHorse mission to improve the physical, mental, and emotional health of veterans with post-traumatic stress. The group does this by providing a healing, equine-assisted experience using off-the-track Thoroughbreds.

“Having this book support the mission of the Saratoga WarHorse makes it even more meaningful to me,” Pepper said. “Mr. Pulver was a World War I veteran, born in Saratoga Springs. It is my small way of saying thank you to the veterans who helped to preserve our many freedoms.”

The full-color, hardcover book, measuring 8 x 10 inches, includes Dottie’s detailed memories, reproductions of the letters, plus a vast array of archival photographs tracing Dottie’s rise as a young golf star and Mr. Pulver’s influence over it. The book was designed by famed golf photographer Martin Miller of California-based MillerBrown.

“The letters from Mr. Pulver have such gravity and sense of time,” said Miller. “They combine readily with Dottie’s loving narrative, adding color and a sense of place. Our design intent was to weave the two incredible threads into the pages as a conversation.”

Dottie Pepper is the lead walking reporter for CBS Sports’ coverage of the PGA Tour, Masters, and PGA Championship. She is a 1987 graduate of Furman University with a B.A. in Health Sciences. After an accomplished junior, college, and amateur golf career, she went on to play 17 years on the LPGA Tour, winning 17 times, including two major championships and one additional win on the JLPGA Tour. She represented the United States six times in the Solheim Cup matches, compiling a 13-5-2 record.

Book publisher Mission Point Press is based in Traverse City, Michigan. It edited and produced the book (www.MissionPointPress.com), which was printed at Walsworth Publishing in Marceline, Missouri.

Information about how to purchase the book can be found at www.DottiePepper.net.