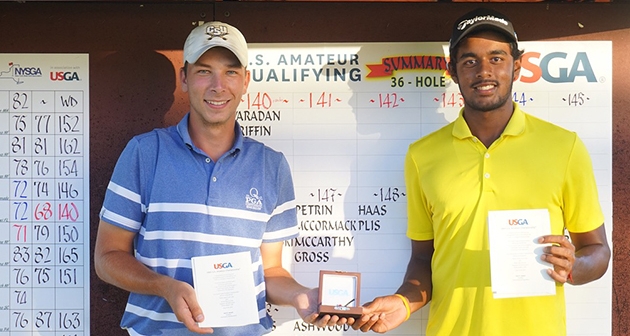 HAMILTON, N.Y. -- Eighty-four players traveled to Seven Oaks Golf Club on Monday to compete for three qualifying spots and two alternate spots into the 2018 U.S. Amateur Championship, which will be conducted at Pebble Beach Golf Links in Pebble Beach, California on August 13-19, 2018.

The conditions were firm and fast, and the hot summer weather made a 36-hole stroll through the tricky venue even more demanding.

Two players separated themselves from the field and finished under par on the day, including co-medalists Arthur Griffin of Lake Placid, NY and Khavish Varadan of Malaysia who both carded 4-under 140s. Cody Cox of Pennsylvania earned the third spot in a two-hole playoff.

At day’s end, four players sat tied at 146, and a sudden-death playoff ensued to decide the final advancing player as well as the two alternates.

Cox, as well as Cullen Chung of Canada, Justin Lane of Woodstock, NY and Tyson Turchanski of Canada, began a playoff on the opening hole at Seven Oaks, the par-4 first.

Cox and Turchanski two-putted for pars, Lane did the same for bogey and Chung made double. On the second playoff hole, the par-5 twelfth, Cox striped his drive down the fairway and Turchanski clipped a tree on the right side and fell into the lateral hazard just shy of the fairway. Cox left himself with a 25-footer for eagle after getting on in two, and converted his birdie to capture the third and final qualifying spot.

Turchanski earned first alternate and Lane will be second alternate from today’s qualifier.

This will be Griffin’s third consecutive U.S. Amateur Championship that he’s qualified for out of Seven Oaks. In 2017, Griffin finished at 1-under 143 to capture the second of two qualifying spots. At the championship conducted at The Riviera Country Club in Pacific Palisades, California, he was spectacular with 66-74-140 to finish T-19 in stroke play and secure the 25th seed in match play. He advanced to the round of 32 before losing to Joey Vrzich of California, 4&2. In 2016, he was an alternate, but eventually got a call from the USGA and headed out to his first U.S. Amateur at Oakland Hills Country Club in Bloomfield Hills, Michigan where he missed the cut.