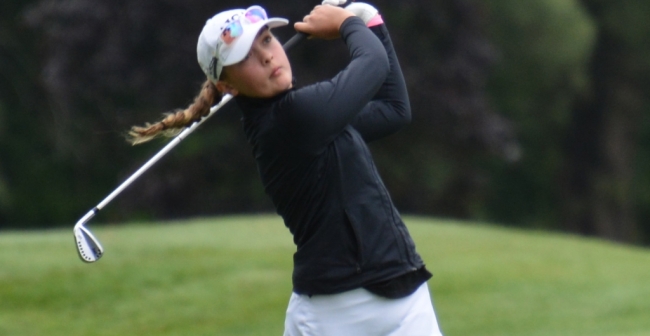 Mamoroneck, NY – The 2017 NYS Girls’ Junior Amateur Champion, Bailey Shoemaker, added yet another accolade to her already impressive list of golfing accomplishments as she qualified for the 2018 National Drive, Chip & Putt Championships during the Winged Foot Golf Club Regional Qualifier on October 1st.

The National Finals will take place on Sunday, April 1st, 2018, at the prestigious Augusta National and has kicked off the Masters Tournament week since the (Drive, Chip & Putt) competition’s inception in 2013.

12-year-old Shoemaker who hails from West Edmeston and plays out of Seven Oaks Golf Club, scored a 47 on Driving, 40 on Chipping and a 37 on Putting to finish with a 124 total (4 points ahead of the first alternate) and was the lone qualifier in the Girls (Ages 12-13) Division.

She began her qualifying run on July 20th at Vesper Hills Golf Club’s local regional in Tully and took the final of three spots with a score of 85. In August, she took the first of two qualifying spots at the subregional at Turning Stone Resort with a 146 total.

This will be Shoemaker’s first trip to Augusta in four attempts at making it to the finals. “To be honest, in years past we’ve been trying extra hard, but this year we focused a little less,” she admitted. “I said if I don’t make it this year, it’s fine. It took some of the pressure off.”

Shoemaker has already captured a state junior title at the age of 12, a championship she’s eligible to compete in for another six years. She won the NYS Girls’ Junior by seven strokes this past July and finished at even-par 144 at Seven Oaks Golf Club, where the championship was held. She also collected her third European Championship title this spring, winning in 2014 and 2015 too.

Along with her trip to Augusta, she'll be heading to another national event in 2018, the 2018 US Women’s Amateur Four-Ball at El Caballero Country Club in Tarzana, California. She qualified in August with partner Megha Ganne of New Jersey, who will be alongside Shoemaker during the Drive, Chip & Putt Finals too, competing in the older Girls (Ages 14-15) Division.