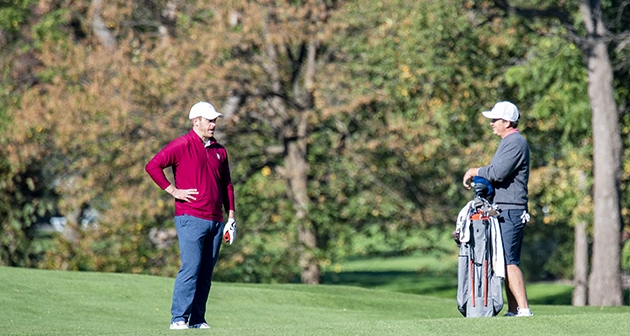 MARCELLUS, NY – Six players went under par during the first round of the 36th New York State Men’s Mid-Amateur Championship at Tuscarora Golf Club in Marcellus.

Jim Gifford of NYSGA eClub Capital District and Bradford Tilley of Sleepy Hollow Country Club are tied atop the leaderboard at 2-under 69. They played in the same pairing during the morning wave off #1 tee.

Nicholas Morreale of Niagara Falls Country Club finished at par in the afternoon. The Buffalo-area player was 2-under through 16 holes but bogeyed Nos. 17 and 18, two of the tougher holes on the golf course.

Gifford, of Ballston Lake, couldn’t compete in last year’s championship when it was held at Buffalo’s Wanakah Country Club. “I’m just happy that I could stay in contention. I love playing in this tournament. Overall, my game feels pretty good. There’s a lot of birdies to be had out here, so no lead is really safe. Especially with the last couple of holes.”

The player from Ballston Lake, drove the tight 283-yard par 4 fifteenth with a 3-wood, and converted the long eagle putt to get him to the red numbers. “I was just trying to lag one up there and was lucky enough it went in. When you drop a 40-foot bomb it’s always a good feeling,” he elaborated.

Tilley, who played alongside Gifford in his Mid-Am debut, successfully drove the green as well on fifteen to setup for a birdie. Two others on the backside of the course and another two early (Nos. 1 and 5), guided him to the first-round co-lead.

“It’s always nice to have a friendly group, and then when you all start playing and you see putts going in, it elevates your game and propels you to make more putts and keep making birdies, instead of just holding on,” Tilley explained. “I started to get in a groove on the back nine. Greens are tough and really true. I’m very happy with the start and I’m looking forward to tomorrow and the rest of the weekend.”

The two co-leaders played with Tuscarora member Kevin Vandenberg, who put together a round of 73.

Nearby Manlius resident Hobika, feels very comfortable on the familiar layout. “I definitely have a comfort factor here. I’ve won on a course like this. You don’t have to overpower it,” he said, referring to Wolferts Roost Country Club, where he came from behind to win in 2015.

2017 champion Patrick Keegan of Locust Hill Country Club shot 5-over 76 to start the weekend, along with Dan Russo of Schuyler Meadows Club who captured the 2019 NYS Men’s Senior Amateur title yesterday at nearby Cavalry Club.

Locust Hill’s Adam Condello, who won the 2017 Men’s Amateur at Bethpage Black, made the cut on the number, shooting a 77.

A cut was applied to the low 60 players and ties, with sixty-one players advancing into tomorrow’s second round.

Tomorrow, all players will tee off #1 and #10 in threesomes at ten minute intervals beginning at 8am.

After 36 holes, another cut will be applied to the low 30 players and ties (as well as anyone within ten strokes of the lead), before Sunday’s final round of stroke play.