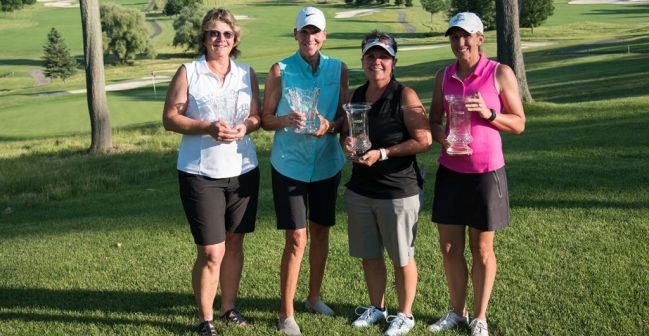 The duo carded a one-under 71 to secure the title. This win marks the first NYSGA title for Carlo and second for Cupp, who won the Women’s Mid-Amateur at Schuyler Meadows Club in 2017.

“We had a really tough start. We both had a really rough first hole and then got it going. Penny had a ton of birdies, I think between us we had nine birdies,” Cupp said. “We had two long decent putts that really got us going,” Carlo added.

This is the first time Carlo & Cupp have competed with each other at a large tournament, normally they are competitors.

“We usually play against each other. It was nice not having to root against her (Carlo) all the time,” Cupp said.

“I think we wanted it more this year than last year,” Watkins said. “The field was stronger we felt this year, so we really felt that we needed to pay attention and get off to a good start and we did. We started out strong and made the turn at two-under,” Cleland said.

The teammates finished at 2-under 70, just a stroke ahead of Joy Florczak & Maggie Kril of Durand Eastman Golf Club.

Kelly Dempsey of Seven Oaks Golf Club & Penny Schiek of Hiland Golf Club won the low-net in the Senior championship with a combined handicapped score of 11-under 61.

“It’s fun to win something and it has been really fun to play with Carina. To win this twice with Carina is awesome,” Cleland said. “It really is awesome. Tee will always be my first pick,” Watkins added.