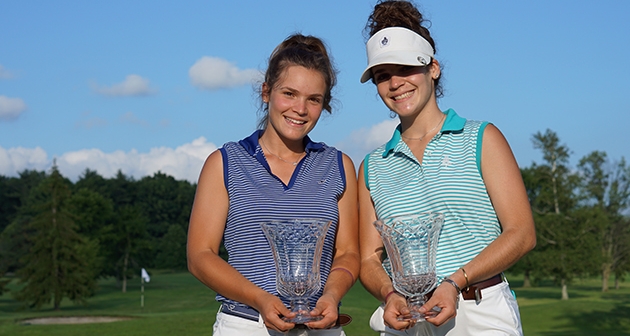 The two groups, who were paired together for the championship, were tied atop the leaderboard at 11-over 83 when all the scores came in after Thursday’s shotgun start, and the groups began a playoff on the 444-yard par 5 sixth hole before moving to the course’s opening hole, #1.

On the first playoff hole, Rentz left herself with a lengthy downhill putt for birdie while the other three competitors were looking to get up-and-down for their pars. On the tricky Robert Trent Jones designed greens, Rentz three-putted for bogey, matching the other players and extending the playoff.

On the second playoff hole, a 315-yard par 4, Samantha, the younger of the Gaffney sisters, converted a 20-footer for par to end the championship.

“The greens were pretty tricky at times,” noted Amanda about the course setup. “I’m thankful I had Sam, she carried me quite a bit,” she confessed. “We started off great, then went through a little bit of a battle. It was a scramble, but we didn’t give up,” finished Samantha.

Sharon Harrington of LPGA Women Who Play (CNY) & Kyra Danneker of Drumlins Golf Club won low-net in the championship with a combined handicapped score of 7-under 65.

The Gaffney family has now tied for the most state amateur titleholders in an immediate family (3) in NYSGA History alongside Mike, David & Lindsay May of Auburn. John, won the family’s first state title with his NYS Men’s Amateur victory in 1999 at Wanakah Country Club. His son and now professional golfer, Billy, won the 2016 NYS Men’s Four-Ball with partner Jeff Wolniewicz at Leatherstocking Golf Club.

“We couldn’t have done it without them, their constant helping us every day. Our swings, our putting, chipping,” said Amanda about their accomplishment. “They’re our coaches. And our mother too, of course,” they added.