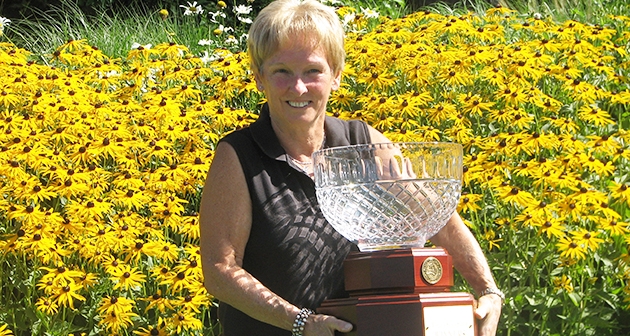 She was hospitalized two weeks prior, and died of complications from a chronic lung disease called pulmonary fibrosis that she’d been battling in recent years.

Brophy was regarded as one of the top female amateur golfers from the area, winning both local and statewide events over the years.

During her younger days, she was also known as a national talent in speedskating, winning hundreds of competitions around the northeast and captured several national and international titles. At age 16, she tried out for the first U.S. Olympic Women’s Speedskating Team, and missed by only a spot.

After her father became ill in 1963, she retired from both sports to take over his business, Purdy’s Discount Wine and Liquor. She focused on managing the store alongside her husband James Brophy (until he passed away in 1998), leaving her competitive days behind.

More locally, she won both the 2012 Northeastern Women’s Golf Association (NEWGA) Senior and Super Senior championships, and defended the Super Senior in 2013. In 2015, she received NEWGA’s Golf Achievement Award, and The Gail Purdy Brophy tournament was named in her honor in 2017.

As a member of Glens Falls Country Club, she captured the club championship ten times. In recent years after her comeback, she was a member of Saratoga National and Ballston Spa Country Club.

She is survived by her two daughters, Mary Brophy Magnus and Kristen Greczkowski, five grandchildren, and three nieces.

A funeral service for Brophy will be held on Monday, March 2, 2020 at 11am at the William J. Burke and Sons Funeral Home in Saratoga Springs.