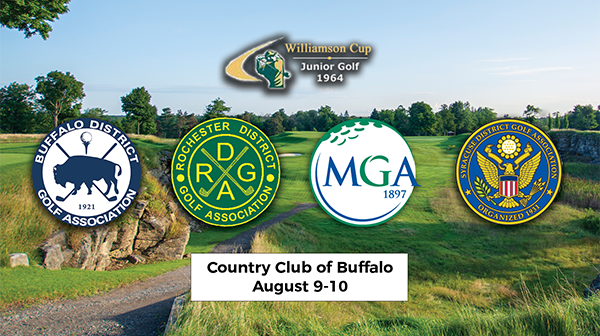 The Williamson Cup is a junior event, where ten northeast golf associations face off in a 36-hole stroke play format. Each association is represented by four junior players, with the best three scores from each round counting towards the team's overall score.

The event was established in 1964, by A. Fred Williamson in memory of his father, a longtime member of the USGA Executive Committee and one of the original founders of Winged Foot Golf Club.

The MGA finished in fourth place, with a score of 28-over 448. Their team consisted of Owen Walsh, Ben Loomis, Colin Summers and Garrett Kessler.

The BDGA finished in fifth, with a score of 44-over 464. Their team consisted of Jacob Dantonio, Tyler Delisanti, Anthony Delisanti and Ryan Edholm.

The SDGA finished in sixth, with a score of 60-over 480. Their team consisted of Tynan Jones, Jackson Saroney, Punn Chittaratlert and Caleb Decker.

The RDGA finished in eighth, with a score of 71-over 491. Their team consisted of Owen Corby, Matt Carpentier, Brody Burgess and Ryan Makowski.

Kessler of the MGA was the top finisher from New York State, placing second with a four-over 144 performance. Loomis cracked the top ten as well, placing T8 and shooting ten-over 150. Anthony Delisanti, the 2021 NYS Boys’ Junior champion, finished T14 at 14-over 154, joined by Walsh and Dantonio.

The Washington Metropolitan Golf Association (WMGA) was the 2021 winning team, finishing at 15-over 435. The top individual finisher was the WMGA’s Marshall Meisel at 2-over 142.