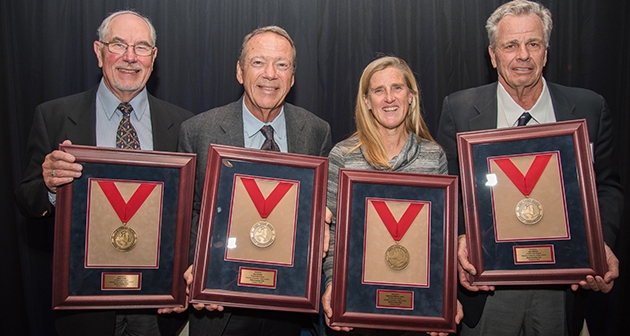 ELMIRA, N.Y. -- It was an evening to remember on Saturday, October 5th at Elmira Country Club, as guests from around New York and traveling from as far as North Carolina and Florida gathered to celebrate the induction of four new members into the New York State Golf Hall of Fame.

Levins and Sindelar are two of the most notable golf stars to come out of Elmira, and the Southern Tier venue was fitting to honor the two Twin Tier golf legends. Levins grew up just off the sixteenth hole at Elmira Country Club, and Sindelar had a similar situation, growing up on nearby Soaring Eagles Golf Course.

The special evening began with a cocktail reception and dinner, followed by the induction ceremony.

NYSGA President Warren Winslow of Western Turnpike opened the induction ceremony with a few words, along with Hall of Fame Chairman Joe Enright of Lancaster Country Club in Buffalo.

“This evening we’re here to pay tribute to four of New York State’s most distinguished and accomplished competitive golfers and contributors to the game who have earned immortality as part of New York’s rich golf heritage,” said Enright.

Presented first was the late golf legend Walter Travis who was represented by Ralph Garnish of the Walter Travis Society, a non-profit organization that currently operates out of Elba, New York.

Next was Mary Anne Widman Levins, who was introduced by her oldest daughter, Keely.

“I’m overwhelmed. It’s been over thirty years since I’ve played competitive golf. I am quite humbled, honored and thrilled to be here at Elmira Country Club. The New York State Golf Association has always been wonderful to me. Betty Deeley, I am one of her girls. She spent over forty years nurturing women in golf in New York State,” said Levins looking back on her days of competitive golf, which she retired from in the mid-80s.

“Obviously, I’m proud of my accomplishments on the golf course and probably top of the list is sharing those three state titles with already inducted Don Allen and Al Foster,” said Baldwin of winning the NYS Men’s Amateur, Mid-Amateur and Senior Amateur. “But as Doug (Vergith) eluded, I think the greatest rewards that I’ve gotten was from being involved on the administrative side with the Metropolitan Golf Association.” Baldwin was the MGA’s President from 1993-94, as well as a past Executive Committee Member for the Long Island Golf Association, a Board Member for the Long Island Caddie Scholarship Fund, and played a key role in establishing the MGA’s Foundation.

Last to be honored was current Champions Tour player Joey Sindelar, who was introduced by the NYSGA’s Andrew Hickey.

"I was totally surprised six months ago. I look at the names on that board over there, and what a thrill to be going up there,” he said of the honor. “The tour players, when they talk about things in the locker room it can be a number of things, but often times they’re remembering back to these very days. People think that we might have forgotten these days. But these moments become sweeter as we go, and I think it’s important for you to know that. Those state am trophies are sneaking up my trophy case.”

The night finished with closing remarks from NYSGA Executive Director Bill Moore thanking everyone for their attendance along with final congratulations to the inductees and their families.

There are now 21 members in the NYSGA Hall of Fame. The next Class will be announced in early summer of 2020.