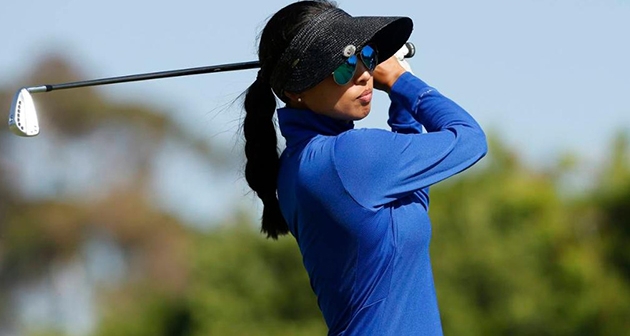 Four Downstaters to Compete in 31st US Mid-Amateur in Houston

HOUSTON, T.X. -- (11/14) All three players from the Empire State fell during the round of 64 at the 31st US Women's Mid-Amateur Championship at Houston's Champions Golf Club on Monday.

Ina Kim lost 1 down to Lisa Schlesinger of Fort Myers, Florida, after building up a lead throughout the front side of the match. Schlesinger flipped the script at the end of the match, winning four of the final five holes to come back from 3 down.

Liliana Ruiz-Munoz, who snuck into the final match-play qualifying spot, faced off against 1st seeded Katie Miller of Jeanette, Pennsylvania. Miller climbed to 4 up through five holes and Ruiz-Munoz was never able to swing momentum back her way.

Alyssa Roland fell to 3rd seeded Marissa Mar of San Francisco, California, 2 and 1. After making the turn 5 down, Roland began to make up ground on Mar but was too far back to catch up.

(11/13) -- Ina Kim advanced to match play after opening rounds of 71-78 (149) during stroke play qualifying at the 31st US Women's Mid-Amateur Championship. She will open against 49th seeded Lisa Schlesinger of Fort Myers, FL.

Two additional New York players earned their way into match play during an 8-for-5 playoff on Monday morning after both carding 36-hole totals of 160. The playoff was conducted on Nos. 10, 11, 17 and 18. Alyssa Roland took the third of five spots after a 15-foot par putt on No. 17. Liliana Ruiz-Munoz registered a par on No. 18 to secure one of the final two spots in the round of 64.

(11/10) -- Four from New York will be competing in the 31st United States Women’s Mid-Amateur Championship this weekend at the Champions Golf Club (Cypress Creek Course) in Houston, T.X, November 11-16, 2017.

They will join 128 of the world’s best women amateur golfers, ages 25 and older, vying to advance through stroke play qualifying and into the match play round of 64.

Harris, 47, was the sixth of eight players who qualified for the Championship in September at Watchung Valley Golf Club in Watchung, N.J. with an 82.

Kim, 34, earned medalist honors with a 71 at Watchung Valley. She recently led Team New York to the top of the leaderboard through the first two rounds at the 2017 USGA Women’s State Team Championship at the Club at Las Campanas (Sunset Course) in Santa Fe, N.M. This week’s Mid-Am will mark Kim’s third USGA event of the 2017 season, having also competed in the US Women’s Amateur back in August. Her recent return to golf after an eleven-year hiatus has sparked national attention due to her past successes as runner-up in the 2000 U.S. Girls’ Junior and an impressive collegiate career at Northwestern University. Kim’s older sister Hana, of Los Angeles, C.A. (where the sisters grew up), will also be competing in the championship.

Ruiz-Munoz, 48, was the 2017 Women’s Metropolitan Golf Association Player of the Year after winning the 114th WMGA Match Play Championship in June at Old Westbury Golf & Country Club. Last year she appeared in her first US Women’s Mid-Amateur where she advanced to the match play round of 16. The metro-area player, originally from Colombia, qualified in August at Blue Hill Country Club in Canton, Mass. after carding a 79.

Roland, 28, has qualified for five USGA championships including two US Women’s Mid-Amateurs in 2013-14 and two US Women’s Four-Balls in 2015-16. She played her college golf at Yale University from 2008 – 2011. Her 74 at Concord Country Club in West Chester P.A. in August was enough to earn qualifying medalist honors.

The U.S. Women’s Mid-Amateur Championship originated in 1987 as a result of a need to provide a national competitive arena for amateurs age 25 and older. By 1987, it had become increasingly difficult for female amateur golfers beyond college to compete equitably with their collegiate counterparts, for whom golf was nearly a full-time vocation.

The inaugural Women's Mid-Amateur attracted 320 entries, only 22 fewer than the number that had entered the 1987 Women’s Amateur a few weeks earlier.