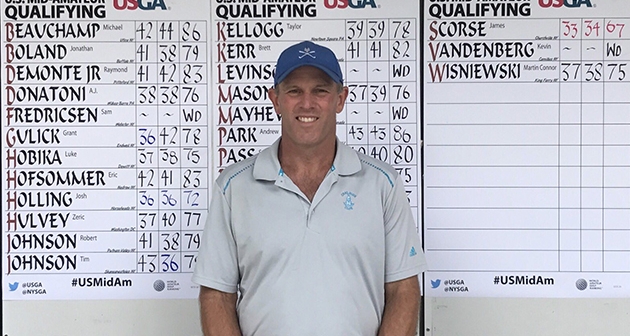 Five-Time State Champion Headed to Another US Mid-Am

SYRACUSE, N.Y. -- Five-time state champion, Jim Scorse, punched his ticket to another US Mid-Amateur Championship after capturing the lone qualifier spot at Radisson Greens Golf Course with a convincing 5-under 67 on Thursday morning.

Scorse was among a field of twenty-seven players who were all vying for one qualifying spot to this year’s championship, which will be hosted by Capital City Club in Atlanta, Ga., in the beginning of October.

He began with birdies on three of his four opening holes (1,3,4) with six total, and managed only one bogey.

The next best finisher, past NYS Boys’ Junior winner Josh Holling, was five back from Scorse with an even-par 72. He will be the first alternate.

The second alternate at the qualifying site was Ryan Pfeifer of Pennsylvania, who carded a 1-over 72 and outlasted Eric Ross of Ontario in a 3-hole playoff for the position.

The player (Scorse) out of Stafford Country Club has held the spotlight in New York for quite a few years with his consistent success at district, state and national events.

He’s been a frequent at the US Mid-Am for over a decade and has played in six of the last seven championships.

Scorse hasn’t made the US Mid-Am two-round stroke play cut since 2012 where he advanced into the second round of match play at Conway Farms Golf Club in Illinois.