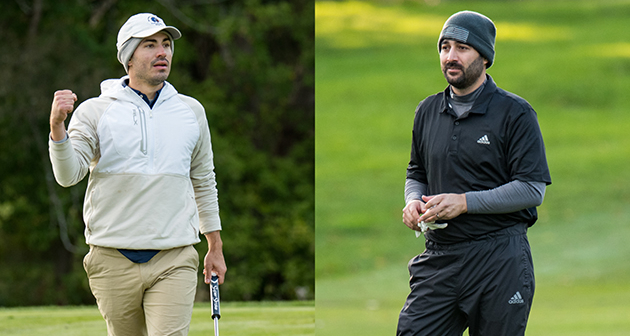 HAMILTON, N.Y. -- Heavy rain overnight prompted a one-hour delay pushing back both the morning and afternoon tee-times for the opening round of the 38th NYS Mid-Amateur Championship.

All players that teed off in the morning were able to finish their rounds, but play was postponed in the late evening due to darkness, forcing the last few groups to complete their rounds on Saturday morning.

The wet conditions and frigid temperatures led to some higher scores in the morning, with only one player finishing under par.

Kevin Lewis, of Brook-Lea Country Club, closed out his first round with a birdie to card a 1-under 71.

Former NYS Boys’ Junior champion James Blackwell, of River Oaks Golf Club, finished at even par for the day and sits two strokes back of the leaders.

The afternoon rounds produced lower scores and both leaders in the clubhouse heading into day two.

“I missed a two-and-a-half footer on my first hole of the day, so I got the nerves out of the way quickly,” Collins said. “I drove it really great and I just figured anything around even par today was going to be a really good score today in the wind.”

Three of his four birdies came on the back nine (he started on #10) which played slightly easier than the front for the day.

“I thought I did a really good job today, in the wind, just being patient because it was gusting really hard for the first 12 holes today,” he said. “Just when I have those numbers that really fit my eye just to make a more committed swing. Missed some greens today but had a pretty good short game. I was able to get up and down for the most part.”

Joining Collins at the 70 was Doug DeCarlo, of the NYSGA eClub – CNY, who went on a tear down the stretch at Seven Oaks. He was 3-over through nine, but five birdies on the back propelled him to the top of the leaderboard.

“My worry wasn’t on golf,” DeCarlo said. “My worry was ‘let’s get this round finished’ because I have a three-month-old and he’s not really sleeping at night, so it kind of keeps things in perspective.”

Billy Hanes and Kyle Downey joined Lewis in a tie for second place at 1-under.

Crag Burn Golf Club’s Hanes left his birdie putt just short on his final hole to miss out on a share of the lead. While Downey went 3-under on the back nine to pull closer to the leaders.

Seven players will start round two three strokes back of the lead, at 1-over.

The groups who did not complete their rounds will restart at 7:00 a.m. on Saturday, before the start of round two.

The projected 18-hole cut is currently at 6-over, which will limit the field to the top-60 scores and ties.

After the second round of 18 holes, another cut will be applied, and the field will be reduced to the top-30 scores and ties heading into Sunday’s final round.