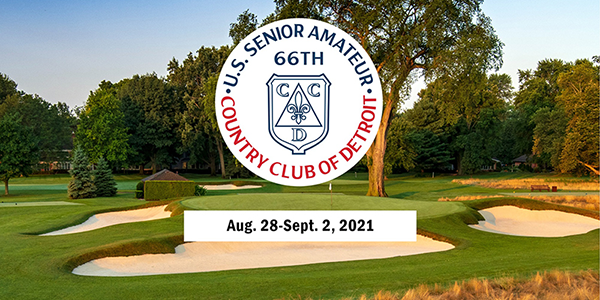 (Update - September 1) - James Scorse and Dan Russo each won their Round of 32 matches, but were unable to advance to the quarterfinals in their evening matches at the 66th U.S. Senior Amateur at Country Club of Detroit.

Scorse defeated Chris Fieger, 2 and 1, while Russo defeated Sherrill Britt, 1 up, to advance the round of 16. Kevin Vandenberg lost to Lewis Stephenson, 2 and 1, while defending champion Bob Royak lost to Billy MItchell, 1 up.

In the Round of 16, Scorse lost, 4 and 3, to Jerry Gunthorpe of Ovid, Michigan. Russo was defeated, 5 and 3, by Dave Bunker of Canada.

(Update - August 31) - Four of the five Empire State competitors advanced to the round of 32 at the 66th U.S. Senior Amateur at Country Club of Detroit.

Ken Baskt lost to Paul Jett, 3 and 2, and has been eliminated from contention.

As the round of 32 gets underway, listed below are the group's opponents and tee times.

(Update - August 30) - Dan Russo of Hagaman and Donald Burns of Jamesville were added as alternates prior to the championship, making seven Empire State natives in the field for the 66th U.S. Senior Amateur at Country Club of Detroit. Five of them made the cut.

As match play begins today, listed below are the group's opponents and tee times for the Round of 64.

Carlson finished runner-up at the 2019 Westchester Senior Amateur. He teamed up with his dad, Bear Carlson, to take home the 2019 British Victory Cup. He earned entry into the tournament by grabbing one of four spots at a sectional qualifier in New Jersey.

Royak won the 2019 U.S. Senior Amateur, defeating Roger Newsom, 1 up, in the final at Old Chatham Golf Club. He has competed in three U.S. Senior Opens, including 2012, 2019 and 2021. He missed the cut in this year’s championship. Currently residing in Georgia, he was named the 2017 and 2019 Georgia State Golf Association Senior Player of the Year. Royak also won the 1979 NYS Boys’ Junior Amateur Championship at Soaring Eagles Golf Course in Horseheads, N.Y. He most recently qualified for the 121st U.S. Amateur at Oakmont, but failed to make the cut.

Scorse, in his first year of eligibility, earned qualifying medalist honors at a sectional qualifier in Rochester. He won the 2016 NYS Mid-Amateur over James Condello by one stroke at Stafford Country Club. He’s a five-time NYSGA champion overall, winning the 2011 and 2012 Four-Ball titles, 2005 Men’s Amateur and 2013 Mid-Amateur. He’s been a frequent presence at the the U.S. Mid-Amateur for the past decade. His list of district championships include eight Rochester District Golf Association (RDGA) Match Play titles, eight Mid-Ams, five Amateurs, and was elected RDGA Player of the Year fourteen times since 1997.

Vandenberg, in his first year of eligibility, grabbed a spot in this year’s championship at a sectional qualifier in New Jersey. He has won a slew of Syracuse District events over the past few years and is one of the youngest competitors in the field at 55 years old. He qualified for the U.S. Senior Open twice (2019, 2016). In 2016, he won the CNY PGA’s Central New York Open and qualified for the US Four-Ball with partner and NYSGA Executive Director Bill Moore. Prior to moving to New York, he was a resident of Michigan where he claimed a Golf Association of Michigan Championship title, a Michigan Amateur title as well as Mid-Amateur title in the early 2000’s. More recently, he placed second in the 2021 NYS Men’s Senior Amateur Championship at The Powelton Club.

Listed below are tee times in Eastern Time for the group's opening rounds of the U.S. Senior Amateur: