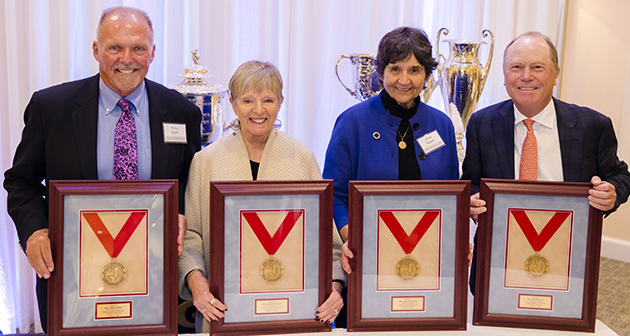 Five Inducted into 2022 NYSGA Hall of Fame Class at Irondequoit

ROCHESTER, N.Y. – It was an evening to remember on Tuesday, October 25th at Irondequoit Country Club, as guests from near and far gathered in Rochester to celebrate the induction of five new members into the New York State Golf Association Hall of Fame.

The special evening began with a cocktail reception and dinner, followed by the induction ceremony.

“It’s our favorite night of the year, to have everyone come back. With COVID we haven’t been able to have a Hall of Fame Dinner in a while, so to have everyone here in person is nice,” said Moore.

“We’re finally here, and we’d like to welcome our distinguished honorees and their presenters, our NYSGA committee members, and the many family members friends and guests who’ve all come together here at Irondequoit Country Club to share this wonderful tribute to five of New York State’s most distinguished and accomplished competitive golfers and contributors to the game, all who have earned immortality as part of New York’s rich golf heritage.” said Enright.

Presented first was the late Berger, who was represented by NYSGA Assistant Executive Director, Andrew Hickey.

Next was past NYSGA Committee Member Biviano, who was introduced by a close friend and fellow past president, Richard Galvin of Ontario Country Club. Biviano's wife, Doreen, was in attendance and accepted the award on his behalf.

“When I joined the club in ’83 Bob and I became good friends,” said Galvin. “Bob loved the junior tournaments. He didn’t see rules as hurting players, he found rules as a way to help players have a better experience in the game. He felt that every time he taught one person a rule, that person would spread it to others around the state. “He left a legacy that we can all be proud of, and I was really proud to know him.”

“On behalf of my family I would like to thank the New York State Golf Association for honoring my mother with this wonderful award. She was an inspiration to me and my friends in our early teens and encouraged us all to pursue our interest in golf and become competitive players,” said Ralph. “She was always a humble and gracious winner who was a great role model for all of us.”

“What I would say to everybody here….to your children, grandchildren, tell them to dream, and dream big, you never know what can happen. I’m the living embodiment of that. I never really thought I’d be up here talking about my golf career,” Jeff mentioned. “Very very meaningful for me and thank you very much.”

Last to be honored was Diehl, who helps out in the Irondequoit pro shop during the summer months while he’s in Rochester. He was introduced by the club’s head golf professional, Ben Wilson.

“I’m truly honored and humbled to be up here tonight. I think about all the people who’ve helped me in my golf career,” said Diehl. “When I look out, I’m not going to remember my junior amateur trophy, I’m going to remember the people that showed up… So when you go home tonight, get on your knees and be grateful for what you have, because I certainly am.”

There are now 26 members of the NYSGA Hall of Fame. This class was initially supposed to be inducted in 2020, but was postponed for two years due to the COVID-19 pandemic. The next class will be announced in the summer of 2023.