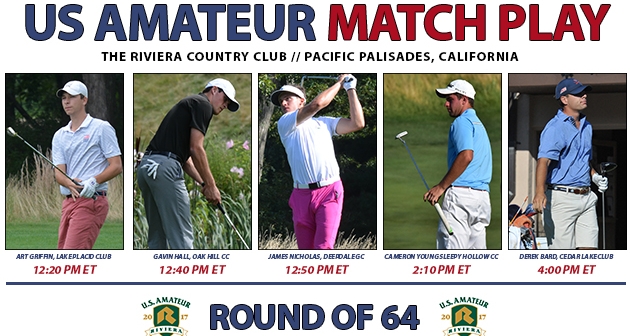 PACIFIC PALISADES, C.A. -- Five players from New York have advanced to match play at the 117th US Amateur and finished in the top 64 after two rounds of stroke play qualifying at the The Riviera Country Club in Pacific Palisades, Calif. & Bel-Air Country Club in Los Angeles, Calif.

On the opening day of qualifying, Griffin fired a 4-under 66 at Bel-Air Country Club to put himself in excellent position headed into his second round at the tougher Riviera. He was fourth on the leaderboard prior to Tuesday’s round and finished with a 36-hole total of 140 (E) to earn the 25th seed. Griffin, of Lake Placid, will face off against Nathan Jeansonne of Louisiana Wednesday morning at 9:20am (12:20pm ET). In 2016 at Griffin's first US Am appearance, he was called up as an alternate and missed the two-round cut.

Hall, of Pittsford, carded a 142 (72-70) during qualifying and earned the 41st seed after a valiant finish on his final nine on Tuesday, registering three birdies in his last six holes. This will be Hall’s third time advancing to match play in his four appearances since 2013. He’s set to take on California-native Sahith Theegala at 9:40am (12:40pm) on Wednesday.

Nicholas, of Scarsdale, finished 1-over (141) in qualifying to earn the 29th seed in his first US Amateur appearance. He will battle with Kyle Mueller of Georgia at 9:50am (12:50pm ET) in the round of 64.

Scarborough’s Young, who opened his fifth US Amateur with a 5-over 75 on Monday, finished stroke play with a staggering 6-under 64, consisting of all birdies and pars, to jump into the 18th seed. Young, who’ll continue into match play for his fourth consecutive year, will play against Robert MacIntyre of Scotland at 11:10am (2:10pm ET)

2015 US Amateur runner-up, Bard, birdied the first hole (#10) of a 13-for-8 playoff on Wednesday morning to grab the 58th qualifying spot and will tee off at 1:00pm (4:00pm ET) against Mark Lawrence Jr. of Virginia. During qualifying, Bard just snuck into the playoff with a 144 (+4). This is Bard’s fourth US Amateur appearance and third time advancing to match play.