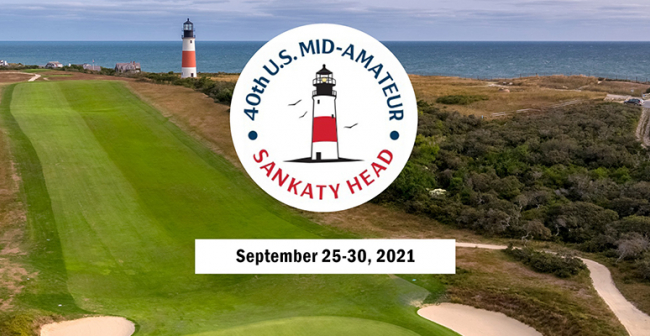 (Update - September 28) - All four New Yorkers remaining in the field at the 40th U.S. Mid-Amateur were unable to advance past the Round of 64.

Yaroslav Merkulov, who earned medalist honors in stroke play, was defeated by Hayes Brown of Charlotte, N.C., 1 up, to be eliminated from contention.

Merkulov finished with medalist honors in a record-breaking 36 holes. He shot nine-under 131, setting the stroke play record of 132 set by Bert Atkinson in 1997 and Jeff Wilson in 2001. His five-under 65 round on Sunday at Sankaty Head matched the competitive course record while enduring more than five hours of fog delays over the weekend. He enters match play as the top seed.

“I had a nice discussion with my coach [Saturday] night, and that helped me regroup,” Merkulov told USGA.org. “The big thing today was staying committed to what you were trying to hit, whether you were trying to ride the wind or fight the wind, whatever it was, you have to commit to the shot. If you stray from that in this wind, good luck.”

Michael Guli withdrew from the field before he was able to complete any holes.

Burns grabbed the final qualifying spot at a sectional qualifier at Crag Burn Golf Club. A former collegiate golfer at Ohio Northern University, he was a two-time runner-up finisher at the Ohio Athletic Conference (OAC) Championship, and earned All-OAC honors during his senior campaign.

Burns defeated Shane Dobesh in a one-hole playoff with a par to secure the final qualifying spot at Crag Burn.

Guli was called up as an alternate from a sectional qualifier in New Jersey. He won the Michael Hebron Amateur in 2014, hosted by the Metropolitan Golf Association (MGA). He’s been a consistent competitor in MGA and New Jersey State Golf Association (NJSGA) events over the years, including the Mid-Amateur and State Senior Open.

McDonagh was the medalist at a sectional qualifier at Cherry Valley Club. He became the youngest winner in the history of the Met Amateur in 2006, when he won at 17 years old. He won his second title in 2008 at Friar’s Head Golf Club. He also owns two Connecticut Amateur titles (2006 & 2011) and won the MGA Ike Championship in 2011. This will be his ninth USGA championship appearance, most recently competing in the U.S. Four-Ball. A former member of the Penn State men’s golf team, McDonagh helped lead the Nittany Lions to two appearances in the NCAA Finals.

Merkulov qualified for the U.S. Amateur in consecutive years (2020, 2021), but missed the cut in both events. He also participated in the  2021 U.S. Amateur Four-Ball, where he and his partner, Shane Dobesh, missed the cut. Merkulov is a four-time NYSGA champion, including titles at the 2009 Men’s Amateur, back-to-back Boys’ Junior titles in 2008 and 2009 and a Boys’ 14U Junior championship in 2006. He also qualified for the 2019 U.S Mid-Amateur at Colorado Golf Club, where he advanced to the quarterfinals.

Miller was the medalist at a sectional qualifier hosted by his home club, Crag Burn Golf Club. He landed the 2018 and 2014 NYS Men’s Mid-Amateur titles. In 2015, he paired up with Billy Hanes to win the NYS Men’s Amateur Four-Ball at Leatherstocking Golf Club. Miller has competed in multiple national events, including the 2018 U.S. Mid-Amateur and the 2018 & 2021 U.S. Four-Balls. This year, Miller teamed up with Chelsea Dantonio to win the NYS Amateur Mixed Team title. He finished T3 in the 2019 NYS Men’s Amateur at Crag Burn and T7 in the 2021 Men’s Amateur.

Nealon took the second qualifying spot at Crag Burn behind Miller to punch his ticket to this year’s championship. He is a three-time Buffalo District Golf Association (BDGA) Mid-Amateur champion, most recently winning this year at Wanakah Country Club. He also won in 2017 at Gowanda Country Club and 2019 at Springville Country Club.

Reid was also called up as an alternate after finishing as the first alternate at the Albany Country Club sectional qualifier.

Royak won the 2019 U.S. Senior Amateur, defeating Roger Newsom, 1 up, in the final at Old Chatham Golf Club. Royak has competed in three U.S. Senior Opens, including 2012, 2019 and 2021. Currently residing in Georgia, he was named the 2017 Georgia State Golf Association Senior Player of the Year. He is one of the oldest competitors in this year's field at 60 years old. He's competed in the 2019 and 2015 championships, and the 2021 U.S. Amateur. He won the Georgia Mid-Amateur this year as well.

Tilley advanced to the quarterfinals and was the stroke-play medalist in the 2017 U.S. Mid-Amateur and made match play in 2018. He has played in eight USGA championships, including four U.S. Amateurs.

Listed below are the tee times in Eastern Time for the group's opening rounds of the U.S. Mid-Amateur: