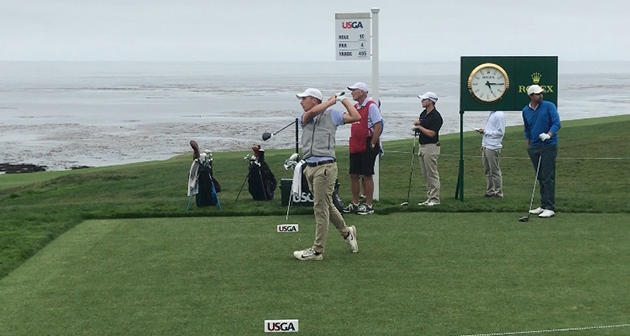 PEBBLE BEACH, CA. -- Eight players from New York traveled across the United States to the famous Pebble Beach Golf Links this week to compete in the 118th U.S. Amateur Championship.

Hagestad, was the only one in the group to advance into the match play bracket after following up his opening 76 with a bogey-free 66 to finish at 1-under at 142, and tied for tenth. In the round of 64, he defeated Harry Hall of England, 1 up. During his next match, he defeated Davis Chatfield of Massachussetts, 4 & 3. Hagestad came close to advancing to the quaterfinals, but fell to Isaiah Salinda of California, 1 up, after missing his birdie putt, while Salinda was able to convert his.

Stroke play qualifying was conducted on both Pebble Beach Golf Links, and co-host Spyglass Hill Golf Course, both in Pebble Beach, California. The two-round cut fell at 4-over par, with the 24 tied at the number, having to play off for the final qualifying spot.

Cavaliere opened stroke play with a 2-over 73 at Pebble Beach and was in good position to qualify for match play, but struggled during the second day at Spyglass to card an 85.

All seven who qualified, did so by way of 36-hole sectional qualifiers held around the country this summer.

The championship is scheduled to continue through Sunday, August 19th, upon which a winner will more than likely be determined.