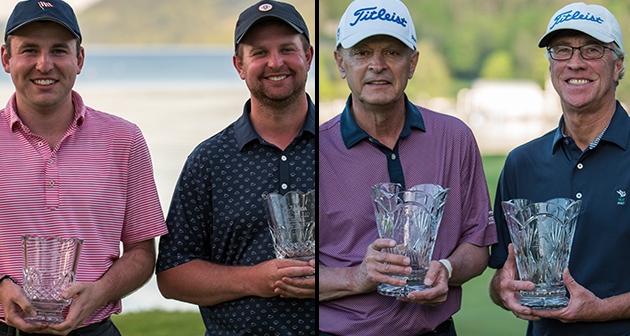 COOPERSTOWN, N.Y. – Michael Dwyer and Michael Stopera (Edison Club) surged up the leaderboard with a 10-under 62 in the final round to win the 10th NYS Men’s Amateur Four-Ball Championship at Leatherstocking Golf Course.

The Schenectady county duo edged another pair of local area players by a stroke to win the two-person championship. They started the day four strokes back, and teed off almost two hours before the final pairing.

The side took care of the scoreable par 5s on the classic Devereux Emmet design, with eagles on nos. 4, 11, 14 (a short par 4) and 15. They settled for birdie on the par-5 18th over Otsego lake, and had only one other birdie on the opening hole.

“Whenever we had an eagle putt, we capitalized, which was great. Nothing was outside of ten feet, they were all six to eight footers,” Dwyer noted.

“We caught fire there and weren’t really thinking about it. When we were out there we didn’t really think we were going to win the golf tournament,” mentioned Stopera.

Jim Gifford (Mohawk Golf Club) and 2019 NYS Men’s Senior Amateur champion Dan Russo (Schuyler Meadows Club) took the first-round lead after shooting 8-under 64 on Sunday. They had a few chances to force a playoff down the stretch, but came up just short after an eagle putt skirted by the cup on the eighteenth. The duo finished at 13-under 131.

“It’s super nerve-wracking. Knowing the guys in the last group and how good they are, we just expected them to make birdies. We didn’t want a playoff, because we hadn’t played in an hour and a half,” the winners mentioned of score watching as the final groups finished up.

Brad Monroe (Lakeshore Yacht & Country Club) and Kevin Vandenberg (Tuscarora Golf Club) finished in third at 132. They were paired with Gifford / Russo, and matched their final-round 67.

Purcell and Salmon were the only team who bettered the winning team’s score, firing a new tournament-low individual round of 61, topping the opening round score by Nick Dilio / Ryan Gabel, who won the 2019 tournament. The side from Shaker Ridge collaborated for seven birdies and two eagles (including the final hole) en route to the NYSGA Men’s Four-Ball record.

“I don’t think about setting records for anything, so to do that is just incredible to be a part of it.” It was the easiest it can be. It wasn’t even a thought, we were just playing and having a good time,” said Salmon on the historic round. Purcell nodded in agreement.

With the victory, Dwyer / Stopera each earned exemptions into the 2021 NYS Men’s Amateur Championship at Schuyler Meadows Club in August. Stopera earns an exemption into this year’s Mid-Am at Shaker Ridge Country Club in September, where he’s also a member.

“It’s a great tournament, and a great one to win. We’re super excited for the exemption at Schuyler Meadows in our area,” said Dwyer, who is still too young to compete in the Mid-Am.

The 9th NYS Men’s Senior Amateur Four-Ball Championship came down to the wire this year at Leatherstocking, with two teams having to decide the champions in a sudden-death playoff.

The Rochester teams were paired together during the final round, with Ogden / Sarkis starting three strokes ahead.

Battle / Sorci made birdies on the first four holes of the round, while the defending champs had a slower start.

“At that point I said, game on, let’s go,” said Battle, who captured the title once before in 2013 with a past partner. “It was tooth and nail the whole way.”

His reference is to what seemed like a match-play battle down the final nine holes between the two groups, who separated themselves several strokes from the rest of the field.

An eagle on the reachable par-4 14th by Battle tied them up with their competitors. Ogden / Sarkis made a few great putts from 15-17 to enter the final hole with a one stroke lead.

“We thought we had them a couple of times and then stuff just came out of the woodwork,” said Sorci of the defending champ's clutch putting on the closing holes.

But the eventual winners made birdie on the home hole, and a par by the others forced a tie and playoff between the two veteran teams.

“It was a real test of nerves. To be able to do that kind of stuff and play like Chris and I did, at our ages and under the gun a little bit. It’s really gratifying,” said Battle of the dramatic victory.

“It really feels cool to win. I have a district win, and now one with the state,” said Sorci, referring to his RDGA Senior Match Play title from 2018.

“It’s a great backdrop, this place is so cool,” Battle said of the Otesaga Hotel and Leatherstocking. “I really had a great time and I said the only thing that’s going to make this better is a win. It’s a perfect end to a day.”