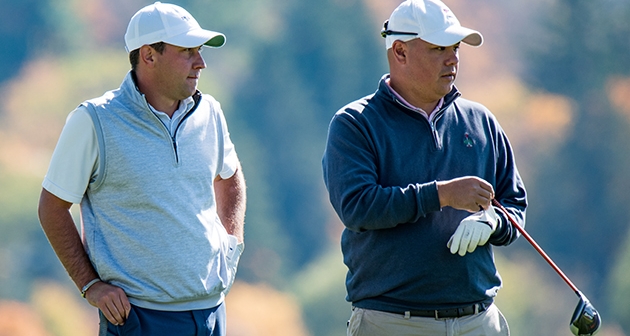 COOPERSTOWN, N.Y.  – Nick Dilio and Ryan Gabel fired a sizzling 10-under 62 during the opening round of the 9th NYS Men’s Amateur Four-Ball at Leatherstocking Golf Course.

The Dutchess County players collaborated for nine birdies, an eagle, and only a lone bogey en route to set a record score for lowest single round at a NYS Men’s Four-Ball (previous low was 63). This was the team’s debut in the state championship.

“We play a lot of golf together but haven’t played in a tournament in a while,” said Dilio. “We’ve wanted to play in this for a few years now but my schedule hasn’t allowed it.” The 25-year-old was the golf coach at his alma mater St. Peter’s University before resigning this year to focus on playing more competitive golf.

They went 7-under in their final six holes, including a 30-foot eagle putt by Gabel on the par-5 fifteenth, and a 50-footer by Dilio for birdie on the par-3 seventeenth.

“The last hour and twenty minutes was crazy. We made somewhere near 120-feet worth of putts in six holes,” noted Gabel, who currently serves on the NYSGA’s Executive Committee.

Three shots back sit Long Island duo Christopher O’Keefe (Nassau Players Club) and Dave Sego t(Bethpage State Park Golf Club), who collaborated for 7-under 65. They will join the leaders tomorrow off #1 in the shotgun.

Defending champions Billy and David Hanes of Crag Burn Golf Club, who played with Gabel and Dilio, shot 67 in the first round.

“It’s cool coming in as defending champions. We got to witness Nick and Ryan tear it up today, which was incredible,” said Billy, who also won the event in 2015 with former playing partner Jamie Miller.

“Tomorrow with the weather, not sure what’s going to happen. It could get windy, and seventeen and eighteen could get dicey,” commented younger brother David.

Joining the Hanes brothers at 67 is Kevin Vandenberg (Tuscarora Golf Club) and Brad Monroe (Timber Banks Golf Club & Marina), who recently qualified for the 2020 U.S. Four-Ball together out of the Wanakah qualifier in Buffalo.

Webb and Branham collaborated for eight birdies, including a chip-in on the second, while 2018 NYS Men’s Senior Runner-up Sarkis and partner Ogden had six birdies and an eagle.

“Our games are very comparable so we are very comfortable together,” commented Branham on the team’s strong opening.

Five more teams shot even-par or better during the opening round on the 6,040-yard layout.

Tomorrow the shotgun start has been moved up to 9:00am for the final round of the championship, due to Wednesday afternoon’s rainy forecast. Winners will be selected in both the open and senior division, with the open division champions earning exemptions into the 2020 New York State Men’s Amateur at Onondaga Golf & Country Club and the 2020 New York State Men’s Mid-Amateur at The Seawane Club.