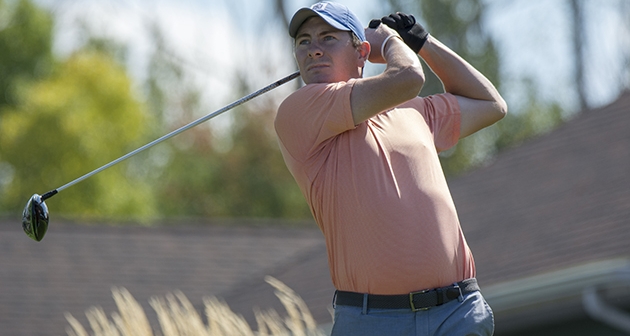 The 29-year-old player from Locust Hill Country Club fired a 4-under 68 on Lake Erie’s neighboring layout, and holds a 3-stroke advantage with 36 holes left of competition.

Patrick Nealon was the lone under-par score in the morning wave, coming in at 71.

The opening-round cut fell at 79, with 66 players advancing into tomorrow’s second round. The field has been repaired based on scores and all groups will start off #1. After Saturday’s second round, the field will be cut once more to top-30 and ties for Sunday’s final.

Downey, who was in contention throughout last year’s Mid-Am (and was in the final group on Sunday) and a first-round leader in 2016, has been playing very confident golf as of late.

Last weekend, he advanced to Match Play at the U.S. Mid-Amateur at Charlotte Country Club and clearly carried that momentum into this weekend. “I realized that I belong there. It wasn’t a gift or miracle that I made it there,” he mentioned about finishing 35th in stroke-play qualifying among many of the top mid-amateurs in the country.

“Today I hit the ball the best I have in probably two or three years. I missed one fairway, two greens, and made a mess of three.” He detailed, referring to his lone bogey on the round. “My swing coach and I have been working on playing in the wind. I’m getting better at it.”

The wind certainly picked up in the early afternoon, leaving the PM players faced with an additional challenge.

It was Downey's accuracy off the tee that paved the way for an excellent number on the challenging Willie Watson design. “I got into a really good rhythm with the driver. I made it a point not to miss left today. I could have made a really good number today if I could have stuffed a couple and made a few putts.”

His experience being in contention over the last few years should assist him in avoiding mental errors over the final two rounds. “I’ve been in this situation before where I was the leader the first day and gave it away. Normally I like to play from behind, just aim at pins and make a few people nervous. Now I’ll just have to aim for the middle of greens and play a little bit more conservative.”

Nealon, of nearby Brierwood Country Club, used his local knowledge of the course en route to his red numbers. “I’m really familiar with the course. I’ve played here a lot and am pretty confident all around here. I don’t mind the wind. I’m a good wind player, I usually keep it low and under it.”

When asked about his thoughts on the rest of the weekend, he mentioned, “It’s a long weekend, I know how it goes.”

Live hole-by-hole scoring will continue for the entire field through the remaining 36 holes of the championship.