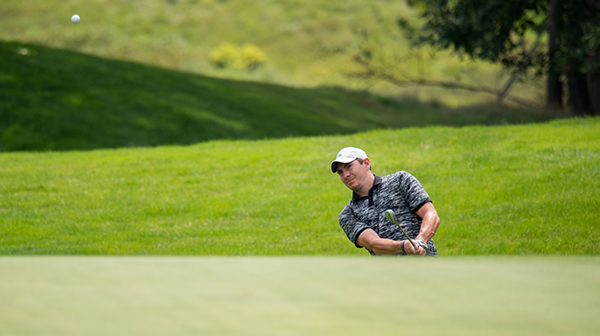 Downey shot six-under 66, coming within two strokes of tying the Schuyler Meadows course record. He made an eagle on hole thirteen, in addition to five birdies and just one bogey.

“When you come off the scorers table (with one bogey), that’s usually a pretty good job, especially with how firm and fast it was today,” Downey said.

The 31-year-old played men’s basketball at the neighboring Siena College from 2008-12, but had only played one time at Schuyler Meadows prior to this week’s championship.

On the par five thirteenth hole, Downey hit the fairway off the tee. After that, he opted to hit a seven-iron, and landed his second shot on the green, within 12 feet of the hole. Downey made the downhill putt for an eagle.

“It really helped that the wind picked up on a couple holes, especially thirteen,” Downey said. “It was a tricky putt because it can get away from you too so I was glad it hit the hole and stopped.”

Downey noted the greens at Schuyler Meadows were playing especially fast on Tuesday, and all of his club decisions seemed to work out in his favor.

“If you miss in the wrong spots around the greens, good luck trying to get up and down,” Downey said. “Off the tee, I always chose the right club just to keep me in play and try to keep the ball in the fairway. Whenever I had a green light at a flag, usually I made a good swing to hit it about ten or eight feet, and then made it.”

Sean Puleo of the host club Schuyler Meadows was the second player in the morning wave to post a round under par, shooting a two-under 70 to hold a share of second place.

“The club is definitely excited to have the tournament here,” Puleo said. “It means a lot, we have about seven or eight of us (Schuyler members), so It was good to play well and get a good first round out there.”

Starting his round on hole ten, Puleo made the turn at even-par, then bogeyed hole one. After that, he birdied in four of his next six holes to go under par, and stay that way for the rest of his round.

“That’s where I kind of caught a little fire and got it to under par,” said the recent Washington & Lee graduate. “I knew the course is playing real tough right now so anything around even was going to be good and if you’re in the red, it’s just a bonus for today.”

Puleo also described how the wind gusts affected the tail end of his round. He noticed that it was safer to let the ball roll up to the hole as opposed to trying to get to the cup in the air.

On hole nine, you don’t want to be too far down there. I usually hit driver there but today with the conditions, I hit an iron off the tee, so definitely a home court advantage going right now,” Puleo said.

Two players shot under par in the evening wave: Ryan Hart of Country Club of Buffalo and James Allen of Scarsdale Golf Club. Each of them carded a 70 to join Puleo as the closest to catching Downey at the top.”

“My round today was pretty solid,” Allen said. “Hit the ball really well off the tee, hit some good iron shots, hit a lot of greens and I putted alright today so I was generally keeping myself very steady, wasn’t putting myself in too many problems.”

Hart added, “I definitely feel good about that. I’m in a good spot for the next three days. I was not driving it too well this summer and drove it a lot better today and it gives me a lot of confidence heading into the next three rounds, and hopefully keep it going.”

Both players described how the wind affected their rounds as well. Combined with the challenging greens, approach shots became increasingly difficult as the evening progressed.

“It definitely made you think a lot,” Hart said. “You couldn’t just think of the pin and that number so that definitely stood out. I had to think a lot more today.”

Allen added, “There’s not too much trouble out here but the greens were so firm and the wind was constantly heavy the entire day which made it very difficult because you get drastically different reactions on the greens based off whether it was downwind or into the wind, and it was constantly adjusting.”

Hart, who is on the University of Florida men’s golf team, was two-over through his first four holes, then responded with consecutive birdies to get back to even. From there, he sunk two birdies on the back to become one of four players to put in a round under par.

“I worked it out there with my mindset,” Hart said. “I talked myself back into it, that it’s 72 holes, it’s a long tournament. I just had to keep grinding it out.”

Allen, who is part of the Penn State men’s golf team, noted that his driving is what carried his play on Tuesday. Despite a bogey on his final hole, he finished with three birdies on the back.

“I hit some good drives today that really put me in some good positions,” Allen said. “I was able to take advantage of the downwind holes a lot.”

Ten players shot one-over 73 to sit seven strokes off the early lead. Eleven more posted 74s during the opening round.

On Wednesday, the field will play their second round of 18 holes. Afterwards, the field will be cut to the low 40 players and ties, and anyone within 10 strokes of the lead.