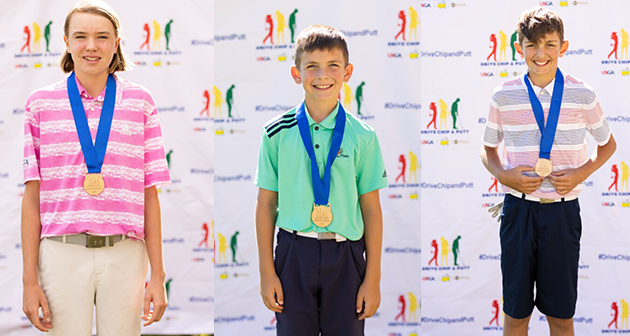 New York’s trio each won their age groups during the regional qualifier at TPC River Highlands in Connecticut on September 26.

Mason, the younger of the two LaTorre’s qualified with a point total of 125, five points higher than the next in his 7-9 age group. He won the chipping portion with 60 points, while posting 46 points in putting and 19 in driving.

Tanner, who topped the boys 12-13, did so without winning any of the categories at the regional qualifier. He finished at 145, seven points higher than the next in his age group. He scored 43 points on the driving, 60 on the chipping and 42 on putting.

Dock, who qualified for the 2020 Drive, Chip & Putt National Finals (contested in April of 2021 due to COVID-19), secured his second visit to Augusta with a point total of 167, six points higher than the next player. He was the top putter with 65 points, while posting 50 points in chipping, and 52 in driving. He is one of only six players returning from this past April’s national finals.

This is the second consecutive year that siblings from New York State have qualified for the DCP National Finals. Amelie and Alexandra Phung both advanced into the 2020 finals out of TPC River Highlands in the fall of 2019.

2022 qualifying began at the local level in May of 2021 at 330 sites throughout the U.S. The top-three scorers per venue, in each of the four age categories separated into boys and girls divisions, advanced to one of the 61 subregional qualifiers in July and August. Two juniors in each age and gender division then competed at the regional level in September and October, held at some of the finest courses in the country. Finally, the top finisher from each of the 10 regionals earned a place in the National Finals.