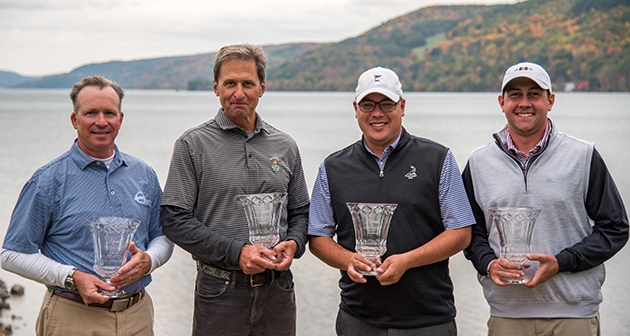 The Dutchess County duo posted a historic 10-under 62, followed by a bogey-free 67 in high winds on Wednesday to each capture their first NYS title.

“We tried to win the day. We had another goal of shooting 62, but wasn’t going to happen in these conditions,” Dilio said of the morning weather on Otsego Lake. “He (Gabel) got off to a really hot start. That got us going. We knew the holes we really needed to score on and took advantage of the ones we needed to.”

Gabel birdied two of his opening three holes, Nos. 1 and 3. “We were able to keep everyone within an arm’s length. We became more conservative as the tournament went on, and I think it was the right strategy,” he mentioned of playing from out in front.

Finishing two strokes back were defending champions Billy and David Hanes (Crag Burn Golf Club) who went low with a bogey-free 8-under 64 during round two to climb into the runner-up position.

This was Dilio and Gabel’s debut in the championship, and will be the first winners from the Hudson Valley to bring home the hardware.

“We’ve been talking about this tournament since February. Obviously, we were disappointed it didn’t happen in May, we weren’t sure if we were going to both make the date. Happy we were. One of my last tournaments as an amateur so I’m glad to do it with this guy,” Dilio mentioned. The 25-year-old will be turning pro over the winter.

He will need to find a new partner for next year’s championship defense. “I’ve already asked someone but he hasn’t given me a definitive answer,” said Gabel, referring to 2015 co-champion and two-time NYS Men’s Mid-Am winner, Jamie Miller. “I’d love to get to play with him. We lived in Florida together, he’s one of my closest friends on earth.”

Both Gabel and Miller currently serve on the NYSGA’s Executive Committee.

They outlasted the 2017 champions, Kevin Webb (Mendon Golf Club) and Robert Branham (Canasawacta Country Club) during the final round, and finished at 12-under 132.

The sides were paired together on Wednesday, and shared the lead after posting tournament-low 65s in the opening round.

“We were one up most of the day. Then it got to be two or three,” said Sarkis, who was the runner-up at the 2018 NYS Men’s Senior. “When we both got it on the green and Kenny had a good look at birdie on sixteen, I was finally relaxing. Three up with two to go and we figured a couple pars would do it.”

The runner-ups, Webb and Branham, finished at 134. They birdied 17 to get in striking distance, but couldn’t find any magic on the long home hole over the water, finishing with pars.

“We hit some very conservative shots on eighteen,” Ogden noted of the pair just trying to avoid mistakes on the iconic lakeside hole.

The course was setup at a shorter yardage of 6,040 yards for the older division for men ages 55 and older.

2018 champions, Mark Dugan and Tom Blank (Oak Hill Country Club) were not able to defend their title at this year’s rescheduled event.

The championships will return to Leatherstocking in May of 2020, which has homed the championship since moving from Victor’s Ravenwood Golf Course in 2013.

Sarkis last competed in the state four-ball when it was held at Ravenwood, near his town of Canandaigua. This year, with the rescheduled date, Sarkis and his partner were able to fit it into their schedules.

“The date change helped. I contacted Kenny and said are you available because we should go win this thing…not knowing that we would play that well. He texted me right back,” Sarkis noted.

This was the first time the two have played competitive golf as teammates. “We’ve played a lot against each other at Canandaigua,” said Ogden.

They will sure enough be back in 2020 to defend their title. “I can’t say enough good things about this place, I really like it,” said Sarkis.