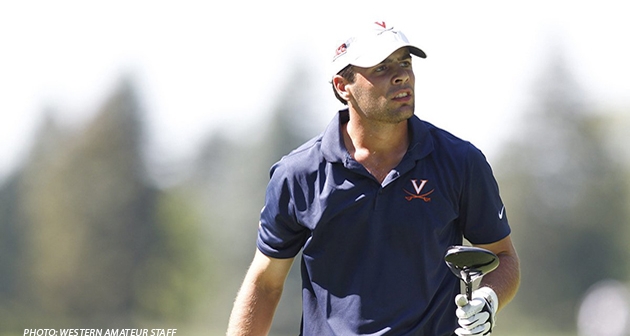 GLENCOE, ILL. -- Derek Bard continues to prove why he's one of the top-ranked amateurs in the world after his outstanding performance in the Western Amateur Championship at Skokie Country Club this week. Out of 156 players invited from across the globe, the 22-year-old was one of the final four remaining on championship Saturday.

Bard, of New Hartford, advanced through the 72 holes of stroke play and all the way to the semifinals of match play before losing to the eventual winner and qualifying medalist, Norman Xiong, 2&1.

Bard began the semifinal match with a bogey to go one down right away. He made birdie on the tough 568-yard par-5 third hole, but Xiong, who plays golf at Oregon, matched it to retain his advantage. Bard then won the next three holes (Nos. 4, 5, 6) to quickly shift the momentum in his direction, a lead he maintained through the turn. On the eleventh hole, Bard registered his last birdie of the championship and bogeyed three of the next six holes to forfeit his lead and abruptly end his week at Skokie.

The match play bracket began Friday morning with sixteen players surviving through the strenuous 72 holes of qualifying stroke play. In four rounds of qualifying, Bard finished tied for ninth at 9-under 275 (72-68-68-67). Xiong, who defeated him in the semis, was the top finisher totaling 14-under 270 over the three days.

In the opening round of match play, Bard knocked off Ruben Sondjaja of Sydney, Australia, 4&3. Later that afternoon, he ousted another player from “down under”, Nick Voke of Auckland, New Zealand, 2&1.

The Western Amateur has been one of the most prestigious national amateur tournaments since its founding in 1899. The championship format is regarded as one of the toughest in amateur golf. Over the years, many competitors who’ve advanced into the match play bracket have moved on to great achievements in both amateur and professional golf.

The recent graduate from Virginia, Bard, is currently ranked 30th in the World Amateur Golf Rankings. This summer, he’s continued to demonstrate his elite ability with impressive play at a few top-ranked amateur tournaments including The Porter Cup, Sunnehanna Amateur and a victory at the Monroe Invitational.

Bard will head to Riviera Country Club in Pacific Palisades, California next week to compete in the 2017 U.S. Amateur under an exemption. He came close to eclipsing the venerable title in 2015 when he finished runner-up to now-professional Bryson DeChambeu, which earned him an exemption into the 2016 U.S. Open and Masters Tournament and three-years into the U.S. Amateur.

In potentially his final U.S. Amateur appearance, he will certainly be a player to watch throughout the coveted championship.