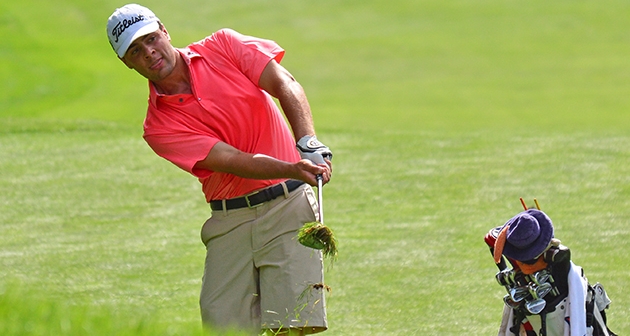 Following a storm that dumped more than an inch of rain on the Devereux Emmet-designed course, there was a two-hour delay for the morning wave and a 1 1/2-hour delay in the afternoon set of tee times. The wet conditions forced officials to allow players to have ball in hand when in their own fairway. The softer greens, and improved lies, helped create better scoring conditions for the talented, 131-player field, leading to many more red numbers, especially compared to the opening round, when only two contestants broke par. There were nine scores under par Wednesday.

First-round co-leader Derek Bard of Cedar Lake Club posted an even-par 71 for a two-day total of 2-under-par 140 and kept control of the No. 1 spot, but he will have plenty of company near the top of the leaderboard. Ten players are within four shots of the lead.

Christopher Stricek of Vestal Hills Country Club was one of the players who took advantage of the softer conditions during the second round with a 2-under-par 69 that put him at even-par 142 for the tournament.

The best round of a low-scoring day was the 5-under-par 66 turned in by Arthur Griffin of Lake Placid Club. He moved into a tie for fifth with a 143 total, the same score posted by Jack Gianniny of the Country Club of Rochester (72-143).

Forty-one players made the cut at 150 or better.

“It was a lot easier scoring today,” said Bard, who finished fourth in this event last year. “I struggled with my swing for a while. I couldn’t find the clubface, but then I started to hit it better. This feels great. I’m excited to be in the lead with 36 holes to go. I don’t look at the leaderboard much, but I’ll be comfortable.”

Feehan, a 25-year-old graduate of Boston College, just wanted to dry off at the end of his round. “The round was sweaty,” he said. “It was so humid, but the softer conditions made it better and easier to attack the pins. The round, as a whole, was one where I hit a ton of good shots.”

Feehan said that Mohawk reminds him of the course he won the NYS Amateur crown on two years ago. “It’s a lot like Bellevue CC, because it’s playing firm and fast,” he said. “I like being in the mix for the title. I liked how I managed myself when I was in contention two years ago.”

McArdell said he took the rain delay in stride. “I got a text at 7:30, so I just kept doing what I was doing,” he said. “It was muggy the whole day, especially right after the rain. I just kept grinding all day. I only had one towel, and it was hard to stay dry from all the sweat. It was kind of tough for me to score, but I did start off with birdies on the 10th and 11th holes, my first two holes of the day. Things started to go a little off for me when I had a three-putt bogey on the 16th.

“I will just concentrate on my own score in the finals,” McArdell said.

Stricek, a 22-year-old graduate of Saint Francis (Pa.), rolled in six birdies to offset four bogeys. “I had a lot of action out there today,” Stricek said. “It was 100 percent more scoreable today. Not only were there softer conditions because of all the rain, but we also had ball in hand in our own fairway. The rough was a lot juicier, brutal even in sports. If you missed the fairway, you were still in trouble. But most of the rough was not super juicy, unless you were around the green.”

Stricek said he was aggressive off the tee, using his driver often. “I only hit my 3-wood twice. To me, it was worth the risk,” he said.

“I made two or three 25-foot bombs, but I had to make a lot of five-footers for par. This was my fifth time playing in the State Amateur, and only my second time making the cut.”

Griffin has good vibes from the Capital Region, as he won the 2015 Troy Invitational at the Country Club of Troy, which is about a half-hour from Mohawk.

“I had eight birdies, and my birdies were stress free,” he said. “I attacked all of the pins today. One of my bogeys was on the short par-5 13th, and it was frustrating, because I lost my ball. After I reloaded, I got what would have been a birdie.

“There was no wind at all today, so the conditions were perfect for me,” he said. “I kept hitting it close. It’s funny, because my mother wanted to come down from Lake Placid to watch me play on Thursday, and I told her I better make the cut first.”

Jim Gifford, a member of the host club, led a group of four players who finished at 2-over-par 144.

The 41 remaining players will play in twosomes for a 36-hole finale Thursday. Tee times begin at 7:30am for the morning wave and 12:30pm for the afternoon wave.