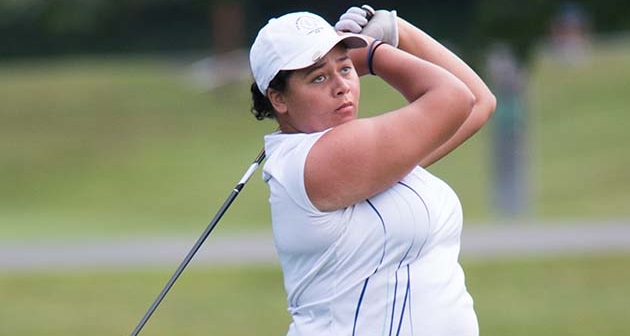 Defending Champ Shoemaker & Pennington Tied for Top Spot After Round One

Related: Round 1 Results / Round 2 Pairings / Photos

Shoemaker, of host club Seven Oaks, made the turn at four-over. She turned her game around and converted three birdies on the back nine.

“I wasn’t very committed to anything. But I did turn it around on the back nine and played a little better,” Shoemaker said.

The 14-year-old looks to capture her third straight NYS title and keep the Betty Deeley Trophy on display at Seven Oaks for another year: “My personal goal for tomorrow is anywhere from three to five under.”

Pennington of Wiltwyck Golf Club led the field by one stroke after nine holes. A veteran to this tournament, the 16-year-old is confident in her strategy headed into tomorrow's final.

“I know this course pretty well. I’ve been playing in this tournament since 2017 so I kind of knew where I needed to put some shots. I finally got my swing under control so I could focus on playing the game, which I think definitely helped me,” she explained.

Speaking on tomorrow’s pairings, Pennington is excited for the opportunity to play with the two-time champion: “Every year I have the chance to play with Bailey Shoemaker, I usually blow up and try to catch her instead of playing with her. Hopefully I get to be in her group and learn something from her because she is an exceptional player.”

Joining the duo in the final pairing will be Lauren Chen of Met PGA Junior Golf Club, who carded a 75.

Tee times for the tomorrow’s final round for the Girls’ Division begin at 12:30 pm.