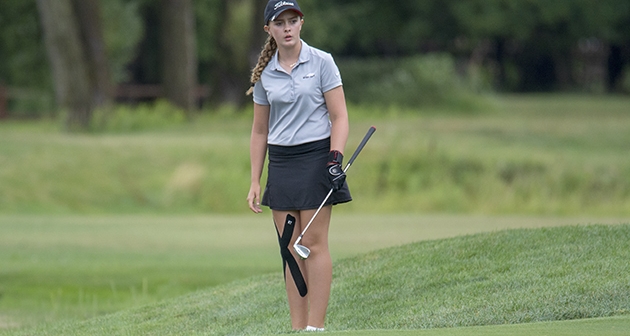 Play was suspended just before 9:00pm on Tuesday night, with the skies becoming too dark for players to continue. Due to rain delays earlier in the afternoon, tee times for the field were delayed by two hours and two groups were unable to finish.

One of the players yet to finish was Emily Gresham of NYSGA eClub – Southern Tier, who made her turn at 2-over and was one of six players to restart on Wednesday morning.

Gresham came in with a 78, and Shoemaker finally could realize her lead around 8:30am.

Joining her in the final pairing will be Mikah McDonnell of Locust Hill Country Club (74), as well as Pasqualina Tartaglione of NYSGA eClub – Mid Hudson at 77. All groups will tee off on the backside, while the Sub-Junior groups will begin on the front.

Four finished at 78 including last year’s co-runner-up Faith Francioso of The First Tee at Eisenhower Park, as well as Malini Rudra of NYSGA eClub - Long Island and Amber Pennington of Wiltwyck Country Club.

Rudra will join Lee and Lopez in the penultimate group.

Shoemaker, who plays out of Seven Oaks, would love to keep the Betty Deeley Trophy on display in the pro shop for another year.

She’s been off to a very impressive start in 2018, appearing at the Drive, Chip and Putt National Finals at Augusta National in April, then competing at the U.S. Women’s Amateur Four-Ball at El Caballero Country Club in California. In July, she played in the Girls Junior PGA Championship at Valhalla Golf Club in Kentucky, and most recently in the U.S. Girls’ Junior Amateur at Poppy Hills Country Club in California.

Last year, when she won by seven strokes at age 12, was likely the youngest winner in the history of the championship, although that cannot be officially confirmed. If she could repeat, coincidentally, she would be the first to do it since 2009-10 when another Bailey (Cocca) was crowned Girls’ Junior champion.

Even more of a coincidence, Shoemaker met Cocca’s older sister on a flight home from the U.S. Girls’ Junior last week, and they chatted about their mutual connections and the Bailey’s shared accolade.

However, the race is tight with nine players within three strokes of Shoemaker, and looking at the weather forecasted for the final round, it could mix things up a bit.

If all goes to plan and weather delays can be avoided, both the Girls’ and Sub-Juniors will tee off in a shotgun format at 1:30pm.