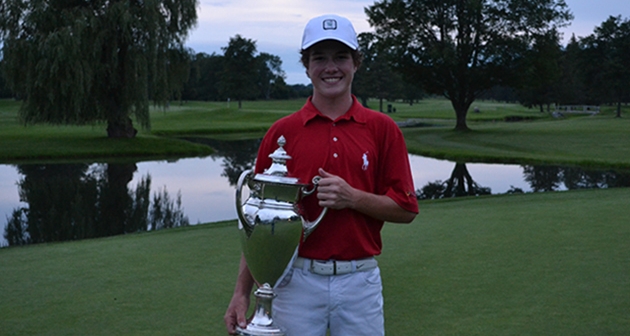 Cummings Outlasts Sisson to Win the 75th NYS Junior Am

Cummings, of Locust Hill Country Club, is now a back-to-back state amateur champion. He won the NYS Boys’ Sub-Junior title in 2016 and will add a second NYSGA trophy to his well-decorated display. “It’s a real honor,” he said about the repeat titles. “I’d just like to thank Jeremy for putting up such a great fight. I’m just happy I was able to come out with a W.”

Throughout the first three playoff holes, which were played on #18, #1 and #12, neither player could capitalize on their birdie opportunities and the duo matched pars until they returned to the tough 455-yard par-4 1st for the fourth and final hole.

During that final hole, both players striped their tee shots down the fairway and landed within just a few yards of each other. On their second shots, Cummings placed one within twenty feet of the flagstick while Sisson, of Skaneateles CC, found himself in the front left-side bunker. After an out that left Sisson with a long up-and-down, he three putted for double and Cummings concluded with a par.

In third place and nearly making the playoff was Michael Minnehan, who had a nice chance to birdie eighteen and tie the co-leaders, but was unable to force the three-way. “I knew I was two back going into fifteen and on seventeen I heard I was one back,” he said. “I hit the last four greens and had looks for birdie, I just couldn’t get them to fall.”

The rising senior, Minnehan, who plays out of Locust Hill Country Club, didn’t begin playing competitive golf until last year and built a lot of momentum this week. “I didn’t feel out of place. I was a little nervous, but I was confident.”

Finishing in fourth was last year’s winner, Christian Chapman of Ravenwood Golf Club, who carded a 72 today to finish at 3-over 147. He came in with a 33 on the back-side thanks three birdies and seven pars but it wasn’t quite enough to keep him in it. “I told myself, if you’re not going to win at least finish strong.” This was the defending champ’s last NYS Junior as he graduated high school this spring and will be joining the Blue Hens of Delaware University next year.

The runner-up Sisson began the day strong with three birdies on the front side of the course and made the turn at 2-under, leading the field. On his way in, he slipped with a few bogeys on Nos. 11, 13 and 17. His only other bogey was on #1. “Back nine I began to get tired and just started chunking shots,” he admitted.

Cummings, who made the turn at 1-over, had a rollercoaster back-nine. He collected a birdie on #12 to bring his round back down to even-par. The pinnacle of his round came on the following hole, a 350-yard par-4, he holed out from 100 yards for eagle and suddenly was tied for the lead. “I actually thought I hit it fat,” he confessed.

On fifteen, he dunked his second shot into the pond guarding the green and ended up making double to drop back down to even-par. “I took a chance and aimed it right at the pin…it was just unlucky I guess,” he said referring to the mud-caked ball he hit on his second shot from the heavily saturated right-side rough. He then dropped another stroke on the next hole, unable to convert an up-and-down from just off the back fringe of the green.

What kept the fifteen-year-old Cummings in it, was his birdie on hole #17 where he took driver over the brook cutting across the hole’s fairway (not uncommon at Seven Oaks) to set himself up for a chance to score, knocked one close and sunk his putt.

Cummings had another chance at birdie on the home hole, but slid it just by the cup and thought he was headed home as runner-up until he looked at Sisson’s hole-by-hole scoring.

Sisson had bogeyed seventeen and they were now tied atop the leaderboard. On eighteen, he could have sealed the deal but lipped out his birdie putt.

Sisson, who turned 18 just a few days ago, felt like the experience was positive. “It was a great experience and golf is nothing but experiences and growing stronger from them. It’s my best finish for a tournament like this.” He earned himself an exemption into the 95th NYS Men’s Amateur Championship field in a couple of weeks at the world-renowned Bethpage Black, a championship he was unable to qualify for earlier this month.

He’ll be joined by both Cummings and Chapman who also earned exemptions this year.

Cummings hopes to come back next year and three-peat, although he didn’t say it. “It’s one of my favorite courses that I’ve played. It’s just a really fair, fun course.”