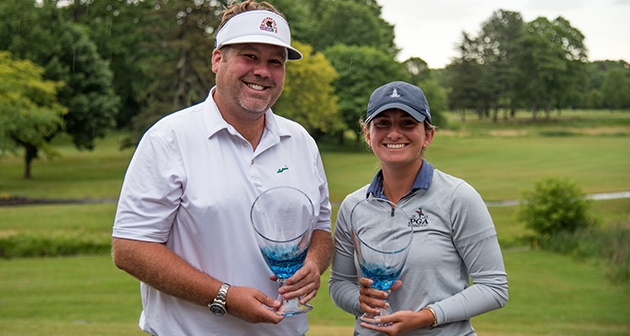 Miller and Dantonio finished with ten birdies en route to their three stroke victory. The closest they let Amber (Wiltwyck GC) and Martin Pennington (MGA eClub - Hudson Valley) come was two strokes behind, as Miller and Dantonio surged with six of their birdies on the back nine to close.

The Pennington’s finished in second after collaborating for six-under 66.

“The last three holes were big ones for us because we both made long putts on each of them,” Dantonio said.

After finishing runner-up in multiple New York State tournaments over the past couple years, Dantonio broke through for her first title, letting out a sigh of relief as she received her trophy on Monday evening.

“It feels great,” she said. “I’m thankful that my brother from another mother came out to help me.”

Miller said each of the putts across the last three holes were about 20 feet, and critical to keeping the distance between them and the field. After a birdie putt improved their score to nine-under after seventeen holes, the side was able to comfortably par on the home hole to make the win official.

“We just wanted to make sure we didn’t give (the Pennington’s) any opportunities,” Miller said. “Always good to win an NYSGA event...I followed (Chelsea) around all day.”

Winners were also decided for best net score in each division. Amber and Martin Pennington came out on top with a net nine-under 63 (66 gross). 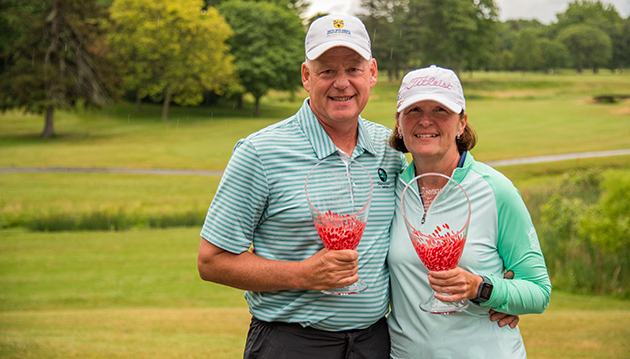 In the concurrently played senior division, two teams finished their round at even-par 72, forcing a sudden-death playoff.

They topped Kim Kaul (East Aurora Country Club) and Andrew Melnyk (Tuscarora Golf Club), who birdied their final two holes of the day (nos. 10 and 11) to force the extra holes.

Due to inclement weather, the playoff was delayed for over half an hour. Both Kevin and Lisa placed their tee shots on the green, opting to play Kevin’s, which was closer to the hole. Kaul and Melnyk had their second shot from just off the green, but were unable to get up and down. Lisa missed the birdie putt, but left it close enough for Kevin to sink one coming back to win.

“She was awesome, she made all the putts today,” Kevin said afterwards, reluctant to take credit. “We were very steady.”

Despite consistent rain for the first three holes, then again to delay the playoff, it was not that much of a factor in their play today.

“The greens were very consistent and very nice,” Lisa said. “It was a lot of fun. It’s a really nice course.”

Kevin added, “We hit a lot of greens. (Lisa) drove the ball well into the fairways.”

This victory marks the second time Kevin and Lisa have won a Mixed Team title, doing so back in 2017.

Net winners for the senior division were Mike Farina (Ballston Spa CC) and Marylee Pollard (Ballston Spa CC), who finished at net five-under 72 (67 gross) to secure their third net victory in this event.