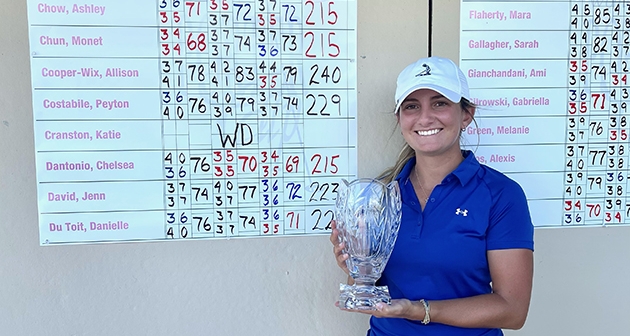 The player out of Crag Burn Golf Club, who's finished in second during the last two NYS Women's Amateurs, scored under par during her final two rounds to elevate into a four-way tie for second at 1-under 215.

“This is one of the tournaments I look forward to most,” Dantonio told Jerry Sullivan of the Niagara Gazette, “because it’s local and it’s always got a great field. Showing myself I can compete with the top amateurs gives me a little extra push for when I go to Q school. That is at the end of August out in California. I’m actually really excited for it. By then my game is going to be in even better shape.”

Dantonio was the lone Empire State player to finish in the top 10 at the prestigious event. Others from New York in the event included Lauren Peter (Carmel) and Amber Thornton (Albany), who tied for 13th at 7-over 223. Lily Zhang (Williamsville) and Melanie Green (Medina) finished T-20 at 224. Past NYS Girls’ Junior Amateur champions Alexis Hios and Lindsay May finished at T-30 and 46 respectively.

The 2021 winner was Kan Bunnabodee of Thailand (currently plays for Purdue University), who won by three strokes after finishing with 4-under 212.