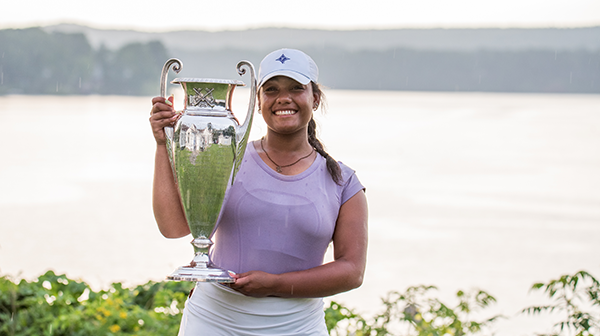 Cox claimed her third NYS Women’s Amateur title, having won it in 2015 at Tuscarora Golf Club and 2018 at Yahnundasis Golf Club.

“It feels amazing. I always love this event. I look forward to it every year,” she said following her round. “Definitely winning it for my third time was an amazing experience.”

The 21-year-old compiled eight birdies and an eagle during the second and third rounds. She entered Tuesday’s long 36 hole-day with a two-stroke lead, and began to really separate herself from the pack on the first couple holes of her afternoon (and final) round.

“The rounds were a little rockier (than yesterday),” Cox said. “Definitely had some bad shots, had some bad holes, had some tough situations, but I grinded through it, and tried to stay positive and play my game.”

After the eagle on 11, she capped her wire-to-wire win with a birdie on 14 to all but decide the championship.

“Those were holes that really pumped me up and kept me motivated to finish out strong,” Cox said. “In between the first round and the second round I practiced my putting and got it figured out. Definitely saw that improvement in the third round. That really helped me alot.”

2019 champion Jennifer Rosenberg of Glen Oaks Club took home runner-up honors, finishing at four-over 223. The 21-year-old shot 41 on the front nine of her third round, but rebounded with a 33 on the back, highlighted by four birdies.

“Today it wasn’t what I expected. I really wanted to play well the last 36 holes,” Rosenberg said. “I had a lot of fun and it was a grind being in this heat.”

She noted that putting was her biggest challenge, as was the case for several golfers on the tricky and undulating Donald Ross greens.

“My irons were actually really good today. I’ve been working on that. Sadly just the putting fell short today,” she said. “I’ve actually been struggling with (putting) lately. As I’ve gotten older I’ve actually gotten a little more shaky on the greens, which is kind of ironic.”

Although, Rosenberg was still pleased with the way she ended her round.

“I’m bummed that I didn’t get back-to-back wins. I was really trying to do that but I’m happy with second place.”

Emily Gresham of the NYSGA eClub - Southern Tier, Claire Yioulos of Oak Hill Country Club and Julia Zigrossi of Ridgemont Country Club each finished with a share of third place, shooting nine-over 228 to round out the top five.

Elena Lopez of Crag Burn Golf Club finished strong with a final-round 71, highlighted by an ace on the par-3 15th hole, a punch bowl green. She finished T6 at 229 along with 2019 runner-up Chelsea Dantonio of the same home club.

Madison Walker of NYSGA eClub - Capital District matched the tournament-low round of 3-under 70, which boosted her into solo eighth at 232.

After both players finished five-over 151 through 36 holes, Schultz and Cupp went into a playoff, beginning on the par-four tenth hole. Schultz’s tee shot hit the fairway, with a good look at the green.

The wind picked up as the pair walked to their next shot, so Schultz went with a knock down nine-iron shot landed within ten feet of the cup. Cupp chipped her third shot up onto the green, landing within a few feet of the hole.

With a chance to win, Schultz’s putt went left to right with a slight downhill slope.

“I knew I had to make it,” she recalled. “I had a feeling (Lauren) was going to make par.”

Schultz sunk her birdie putt, pumping her fist with excitement.

“The playoff hole was the best hole of the tournament,” she said.

Overall, Schultz sensed in her warm up that she wasn’t going to play her best golf today.

“I knew I had to just hang in there,” she said. “Manage my misses and make as many pars as I could. The front nine I was battling my swing. I never really got a good feel for the greens.”

Entering the final round with a share of first place, Schultz shot a 39 through her first nine holes. Schultz and Cupp were tied throughout most of the back nine.

“I just managed my game the best I could. I just wasn’t swinging it that great,” said Schultz. “I knew that I still had to find a way to score. Overall, I’m thrilled that I hung in there.”

Cupp, the 2017 Women’s Mid-Amateur champion and two-time NYS titleholder, entered Tuesday’s round two strokes behind. She made up the ground on the first two holes with birdies, eventually finishing with a 37 on the front.

“I really fought my way around the golf course. Teugega is a real thinkers course...I would’ve liked a few more putts to fall in, today and yesterday.”

“Length is certainly not my strong suit,” she said “I do think the course played a little longer and a little tougher today.”

Cupp also described hole 17, a critical point in her round where she could have fallen out of contention.

“It’s a really tough hole. It’s either feast or famine there,” she said. “I came up a little short, was in the valley. Then hit my approach shot over the green, which is a place I know you can’t go. Thankfully I made a good two-putt there.”

The Mid-Amateur division played the course at 5,683 yards and to a par of 73.