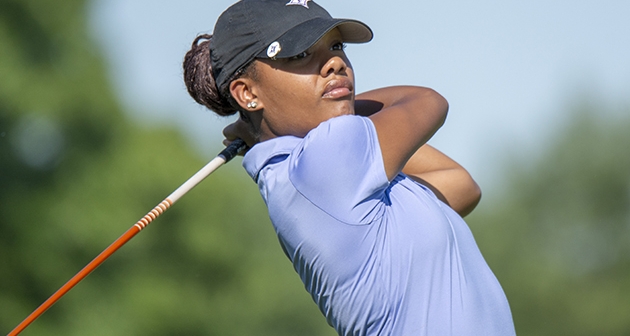 Cox/Hoecker Retain Their Leads After Second Round

NEW HARTFORD, N.Y. -- Kyra Cox extended her lead to six strokes during the second round of the 89th New York State Women’s Amateur Championship and is in excellent position to capture her second state title.

Next on the leaderboard sits Alice Hodge of Bonnie Briar Country Club who’s 77 today brought her to a total of 151.

Joining them in the final pairing will be Crag Burn’s Chelsea Dantonio who sits at 152.

The penultimate group will be Alice’s older sister, Caroline Hodge of the same club at 153, Victoria Parker of Orchard Park Country Club and Taylor Miano of Metropolis Country Club.

Cox opened today with a blistering 34 on the front side, converting three birdies and six pars to turn at 3-under. On the trickier second nine of the Walter Travis design, she began to slip with a few bogeys and a double overcoming her lone backside birdie on the seventeenth.

“I started rushing a little bit and got a little ahead of myself,” she confessed.

The Furman University commit has a steady lead, but will have to continue to manage her game tomorrow and avoid unforced errors. “I felt like that got into my head. I just need to calm down and play my game.”

15-year-old Hodge, retained her position in second by one stroke. Her round today, although sloppier than yesterday, was enough to keep her in contention for tomorrow’s final round.

“This round was definitely more inconsistent. I had a couple doubles and a stronger finish,” referring to her four bogeys, two doubles, and four birdies.

Three of those birdies were in a four hole stretch, from the thirteenth to sixteenth hole. “I was able to finally hit some greens and drained a couple of putts.” This included a 40-footer on the 14th. “It was going way past the hole so I’m lucky that it went in.”

Cox and Hodge, both from Westchester County, are familiar with each other, having played in junior events together before. Hodge won’t let Cox’s track record, or current lead, wreck her nerves headed into tomorrow’s final eighteen holes. “It’s pretty cool but can be nerve wracking at times,” she said about her place on the leaderboard. “I try to not let my position get in my head or bother me. Hopefully I can do that tomorrow.”

Dantonio, seven strokes off the lead, is hoping to just put together a solid round tomorrow and come out with a satisfying score. “I’m going to really try hard to take it shot by shot. I just want to perform the best I can. Pressing doesn’t get you anywhere most of the time, so I’ll take it shot by shot and whatever happens, happens,” she noted about her chances at surging.

The 36-hole cut fell at 165, with 14 players advancing into tomorrow’s final round.

In the Mid-Amateur, A two-over 75 keeps Jenna Hoecker on top of the field by three strokes headed into tomorrow’s final round.

Hoecker, of Brook-Lea Country Club, won the NYS Women’s Amateur in 2013 at the Country Club of Ithaca and in her first year eligible for the Mid-Am, is in great position to capture a new title.

Paired with her will be Tammy Blyth of Monroe Golf Club, who carded matching 76s in the first two rounds and is at 152, three strokes back from Hoecker, as well as defending champion Lauren Cupp of the host club, at 154.

The penultimate group will be Kim Kaul of Gowanda Country Club, Pennie Carlo of Shamrock Golf & Country Club, and past champion Mary Jo Coleman of Wolferts Roost Country Club (winner in 1980 at Foxfire)

The mid-am field began today off #10 and Hoecker went out in 34 with two birdies and no bogeys. She stumbled a bit on the way in, going double-bogey-double on holes 3-5, which held her back from opening a major gap.

“On the front nine I shot two under so can’t really complain about that. Made the turn and left a birdie putt short on the first hole, and another on the second hole. Not too many issues, just had a three-hole stretch where it fell apart for a second and had to figure it back out,” Hoecker said referring to the imperfect stretch.

There’s a sizeable difference in both age and distance between the two Rochesterians leading the field, but both players have a lot of respect for each other’s game.

“I’ve always said that I don’t hit it long, but I hit it straight. The course is great, it’s in great shape, but it’s tough keeping up with Jenna who bombs the ball,” said Blyth.

Blyth plays steady and simple golf, aiming for pars and letting birdies come to her. “I just try to get on the greens in regulation and if a few (birdies) drop, that’s great. I aim for the middle of the green and two-putt for my par.”

She is looking for more of the same tomorrow. “I’m going to go out and play the same way that I played today. Another 76 I would be happy with. I’m just happy to be where I am.”

Hoecker, on the other hand, can capitalize on the course’s short par 5s and use her distance to take advantage of those scoring opportunities.

“Tomorrow I just want to keep it steady, turn those doubles into bogeys if possible. I’ve given myself a lot of chances, they’ve just been slightly missing. Hopefully I get a couple of those to fall tomorrow,” referring to her birdie opportunities.

The two-round cut fell at 164, with eleven players continuing into tomorrow’s third and final round of action. The cut was made to the low 50% of the field and ties (as well as anyone within ten strokes of the lead).