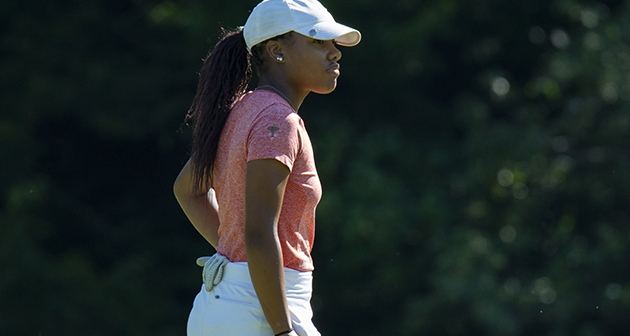 NEW HARTFORD, N.Y. -- An opening 71 from past champion Kyra Cox was enough to take a three-stroke lead after the first round of the 89th New York State Women’s Amateur Championship at Yahnundasis Golf Club in New Hartford.

Cox, of Centennial Golf Club, converted six birdies in route to her 2-under finish on the 6,002-yard par 73 course.

“I felt really comfortable. I’m happy with how I was striking the ball today. I played here in the US Girls Qualifier and played awful, but took some time to practice and saw a big improvement over the last two weeks,” referring to her 80 in the sectional qualifier earlier this month.

This is both Hodge sisters’ first NYSGA appearance. “I usually play in a lot of junior events so I was looking to see how I would stack up,” said Alice. “It was a lot of bogeys and birdies, a lot of up-and-downs, but nothing too crazy,” she noted.

All groups in the Women’s Amateur began on #10 today, while the concurrent Mid-Amateur players were sent off #1. Tomorrow, the groups will reverse sides, and be paired in threesomes based off their first-round scores.

In the opening round of the 10th New York State Women’s Mid-Amateur Championship, first-year Mid-Am Jenna Hoecker is the leader by one after a 1-over 74.

The 25-year-old from Brook-Lea Country Club, was paired with last year’s champion, Lauren Cupp of the host club, which helped a little around the tricky, undulating greens.

“I watched her on some putts and tried to get a feel from there,” she said. “I putted really well but a lot of them weren’t falling. Especially on the par-5s so I wasn’t really capitalizing,” although her two birdies were on the par 5’s, the 6th and 18th.

Hoecker isn’t playing as much golf as she was when she captured the Women’s Amateur in 2013 at Country Club of Ithaca, but still, she’s feeling stronger than ever.

“This is the best I’ve hit my irons. My driver is my best club and I really didn’t get to hit it,” referring to the shorter Mid-Am yardage of 5,368. “When I won the state am I was playing every day, now I play twice a week at most. So, it’s a lot different. I’m pretty happy with 74.”

Kim Kaul of Gowanda Country Club came in at 75, but her story was a common one, as she too struggled on the greens.

“I didn’t putt well all day and the greens are brutal. If you’re on the wrong side of the hole, you can’t stop it. I just didn’t have a good feel,” she said.

Her start wasn’t the strongest, going bogey-bogey on the first two holes, but a birdie on the third got her back into it. “It seemed to calm me down.”

Tomorrow, both fields are in for another 18 holes of stroke play, followed by a 36-hole cut to the low 50% of the field and ties, as well as anyone within