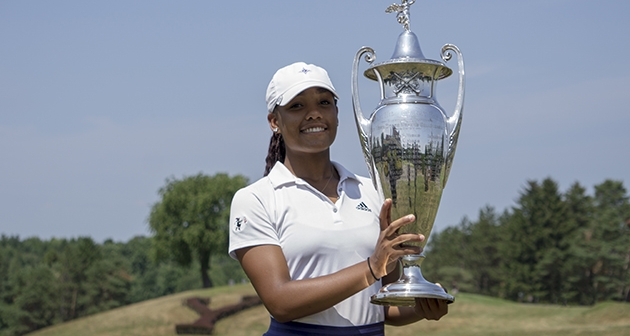 She finished at even-par 219, and had the only under-par round in the field with her opening 71. Her two 74s that followed, tied the field for the next lowest round.

Finishing in second, was Chelsea Dantonio who totaled 226 (77-75-74) over the three days and battled for the runner-up spot with Alice Hodge, who came in at 228.

Defending champion, Marianna Monaco of Scarsdale Golf Club, and Victoria Parker of Orchard Park Golf Club, both registered their best rounds of the week to tie for fourth at 232.

Two-time NYS Women’s Amateur and two-time NYS Women’s Mid-Amateur champion, Christy Schultz of Brook-Lea Country Club, had a top ten finish at 236. This was her first appearance in an NYSGA championship in seven years and a good result for the lone Mid-Am player competing amongst the younger players.

Cox won her first title at Tuscarora Golf Club in 2015, at age 15. Now, three years later, she’s secured another and will have her name etched into the Oak Hill Country Club Championship Trophy once again.

“It’s definitely really special to me because I had a tough beginning of the season and worked really hard to get my game back. I’m going to college, and to win this event before I leave is awesome.”

She’ll be heading south in August to join the Furman University Paladins women’s golf team as a freshman. The victory will instill plenty of momentum and much-needed confidence back into her game after some early season struggles.

“I wasn’t playing like myself. It was frustrating. These past few weeks I’ve been grinding and practicing all that I can. I saw a big improvement, it happened at the right time.”

Entering the final round, she held a six-stroke lead, and even the two players in the final pairing with her, Dantonio and Hodge, had to play flawlessly to have a chance. Still, Cox tried to block her lead out and continue to play aggressively, without letting the pressure get to her too much.

“It’s an awesome feeling, you do get nervous and don’t want to mess it up. I tried not to think about that. I tried thinking about staying calm, having fun and playing my game,” she said, referring to playing with a lead throughout the tournament.

Her takeaways from the second victory included, “Staying calm and having fun. This is a difficult course and I didn’t play my best golf but I stuck in there and didn’t let myself fall off too badly. If I keep my calm, keep a positive attitude, I know I’ll be okay and pull it together,” she concluded.

The race for second between Dantonio of Crag Burn Golf Club and Hodge of Bonnie Briar Country Club, came down to the last few holes. Dantonio was ahead by a stroke, before bogeying the par-4 fifteenth while Hodge converted a par. On sixteen and seventeen, Hodge went bogey-bogey while Dantonio played to par. They both birdied the eighteenth and Chelsea secured her spot in second.

“On the first hole, I made a great putt for birdie and thought, okay let’s get this going, maybe I have a shot here. I wasn’t really paying attention to where Alice was. I knew it was starting to get close when I was on the back. She was playing very steady and wasn’t making many mistakes.”

It took until the thirteenth hole for her to begin to consider the race between her and her groupmate. “I started adding in my head where we were at. It made me go at it more,” she said referring to the last few holes.

Although a way back from first, she was happy to play the game she wanted to on the final day and bring home some hardware to the well-decorated Crag Burn Golf Club.

“It’s been a while since I’ve went home with hardware. I’m always a person who finishes top 5, but don’t get too many wins. It’s a step in the right direction. It’s good for my confidence,” she said about the result.